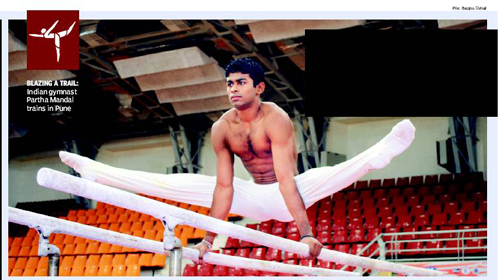 Even as all eyes will be on traditional powerhouses such as Australia and Canada, India’s gymnasts would look to end their medal drought when the competition begins in the Commonwealth Games here tomorrow.
India’s men’s team had finished seventh and the women 10th in the last edition in Melbourne but much has changed in the last two years, at least in terms of exposure.
The hosts have a strong 19-member Indian squad with seven gymnasts each in men’s and women’s Artistic category and five in Rhythmic category.
For want of sponsors, they hardly got a chance to move out of the country and compete between 2001 and 2008 but the last two years changed the situation a bit and it showed in their rankings.
They have been to five World Series, two World Championships and also had a long training camp abroad.
With the exposure, young Indian gymnasts grew in confidence and three men and a woman broke into the top 50 of the world rankings.
Ashish Kumar, world number 31 in the floor exercise and 44th in vaulting table, is India’s best bet as he is the only Indian gymnast to have won a medal at the Asian level. Hopes would also ride on Partha Mondal, who is 31st in parallel bars and 29th in Roman rings.
Rakesh Kumar (35th in Roman rings) and Dipa Karmakar (30th in vaulting table) would also be striving for success in their respective events.
After the recent good showings at the World Cup in Belgium, the Indian gymnastics contingent was quite positive about its chances in the Commonwealth Games.
“Personally, I am very confident. But the pressure would be more this time as the Games are taking place at home. So, I just want to give my best,” said 20-year-old Ashish Kumar who will lead India’s hopes next month.
The Commonwealth Games will feature 14 events in artistic gymnastics — eight in men and six in women’s categories — and
Ashish said the team was targeting four gold medals.
“We are aiming to win four gold medals. We are concentrating on team events more because if we can do well in those categories then the whole side will get medals. Also, individually, we are all working very hard,” said Ashish, who is the only Indian to have won a medal at the Asian level.
All is, however, not well in the team. Like other sports, gymnastics preparations for the Games were not without glitches.
Team coach Vladimir Cherktov was not happy with the build-up to the Games. He was vocal about the late arrival of equipment as well as delay in moving to the competition venue.
The team, which was camping in Pune, was scheduled to move to Delhi and train from the first week of September but due to delay in completion of the venue they could not move to the capital.
Ashish also echoed his coach’s views.
“We are most probably going to start practising at the venue from September 24. Although, we wanted to move to Delhi about a month back, but because of the delays in construction we could not. So, we have kind of lost out on the home advantage,” he said.
“But, we can take heart from the fact that we have been practising with the same equipment with which we are going to perform during the Games,” he said.
As India aim to improve on its fourth position at Melbourne, gymnasts would make a contribution if they land a medal or two.
Leading the medal onslaught will be Canada, who top the overall tally in gymnastics at the Games with an incredible haul of 107 medals.
Robert Watson of Canada, who was the all-round finalist at the inaugural Youth Olympic Games in Singapore last month, will lead a five-member men’s artistic team challenge.
Another one to watch out is Ian Galvan, who was a member of silver-medal winning men’s team at the 2007 Canada Winter
Games in Whitehorse, Yukon.
Just two medal short of Canada’s overall tally, Australia would look to get the better of their traditional rivals as their rhythmic gymnasts start as favourites.
Pole vault defending champion Imogen Cairns will make a comeback from an injury and will be Britain’s main hope. 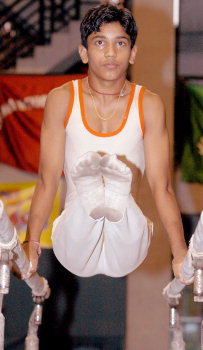