Women’s vault
Hong of North Korea vaults two difficult vaults, a Yurchenko with 2,5 twists and a Cheng on her way to the world title. Biles executes her vaults almost perfectly but the lack in difficulty in her second vault leaves her in second place. Teammate Skinner performs 2 excellent vaults to claim the bronze. 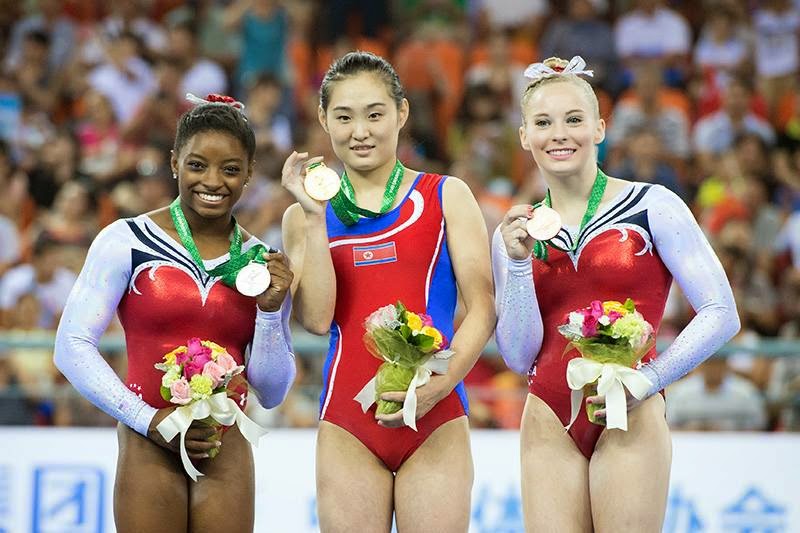 Men’s pommel horse
In a final with 7 Europeans and 1 American, Olympic Champion Berki (HUN) performs an excellent pommel horse routine to score over 16 points and win the World title. Ude (CRO) wins the silver and Tommasone (FRA) gets bronze, in yet another high-class final. 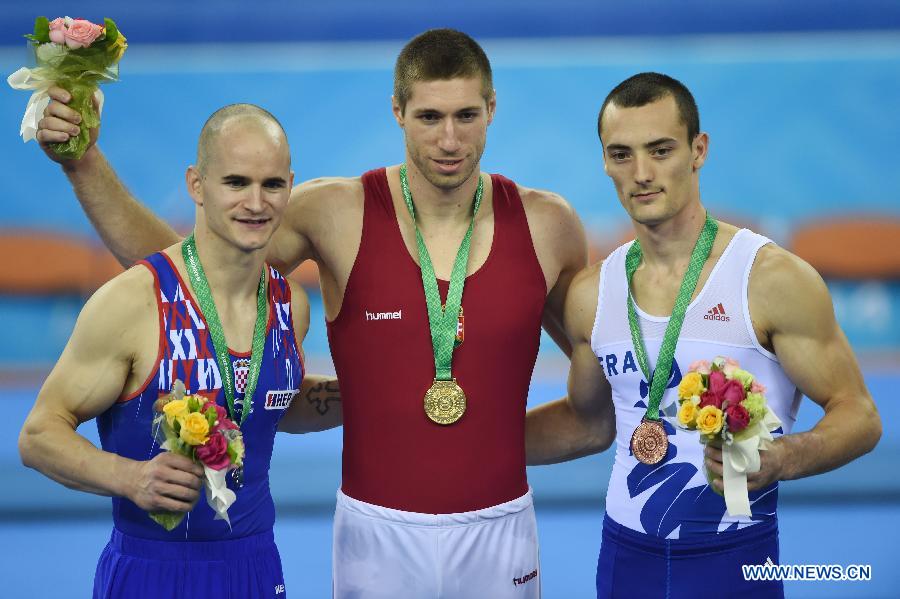 Women’s uneven bars
China’s Yao and Huang go 1-2 on uneven bars. Both routines are packed with difficulty and performed with anice flair, especially the pirouettes. Russia’s Spiridonova claims the bronze with great form and execution. 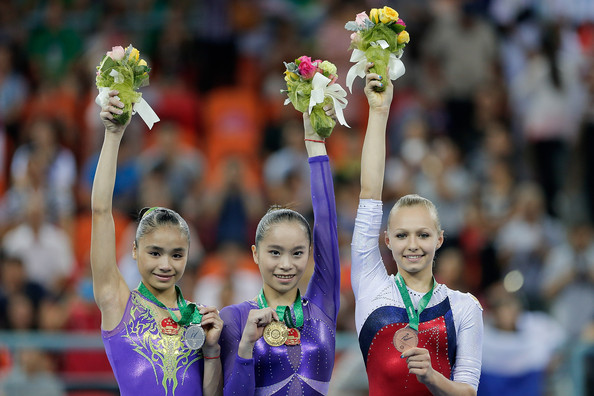 Men’s rings
China’s Liu performed a superb routine early on in the final, and it proved too good for the other competitors to surpass. A score of 15.900 gives him the World title on rings. Olympic Champion Zanetti (BRA) scores 2 tenths less, good enough for the silver. You (CHN) and Ablyazin (RUS) tie for the bronze.

Men’s vault
North Korean Ri Se Gwang shows extreme difficulty with his own vault, a piked Dragulescu, and a Tsukahara full-twisting double tuck. Unfortunately he hurts his heavily taped ankles on landing the second vault.
Only Olympic Champion Yang can match Ri’s difficulty but he falls on both vaults so Ri takes his first World title. Radivilov (UKR) vaults an awesome Dragulescu and Tsukahara double pike for the silver while Dalton (USA) takes the bronze. 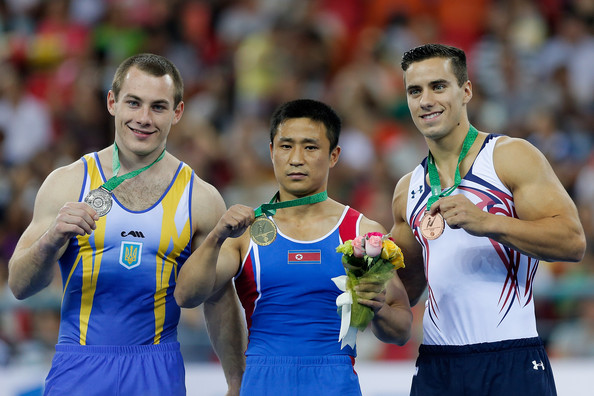 Women’s beam
All-around World Champion performed a difficult routine, with her trademark pirouette in sit, to clinch the beam title less than a tenth ahead of Bai (CHN) who was rock solid with gorgeous leaps and high jumps. A little step on her double pike dismount put her into second place. Defending World Champion Mustafina (RUS) missed some connections which made her D-score drop. It was enough though for the bronze medal as several gymnasts, including favorite Iordache (ROM), fell. 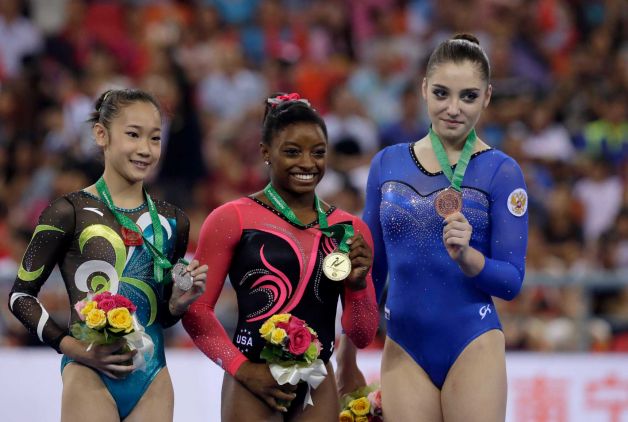 Men’s parallel bars
Huge score for Verniaiev (UKR): 16.125! No one comes close to that so we hear the Ukrainian for the first time these Championships. Leyva (USA) hits his routine, dismounting with an original double tuck front forthe silver. Japan’s Kato performed flawlessly to grab bronze. 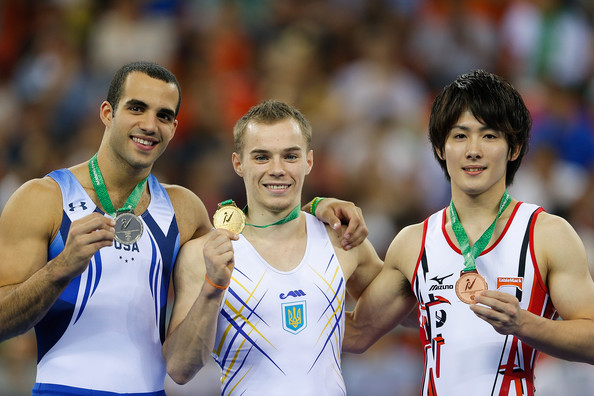 Women’s floor
Defending World Champion Biles (USA) comes out on top again on floor. Her dynamic and very difficult tumbling earnes her the score of 15.333 and her fourth gold medal of these championships. Congratulations! Silver goes to Iordache (ROM) for an elegant, entertaining performance and Mustafina (RUS) gets her second bronze of this afternoon for a routine with several beautiful spins. 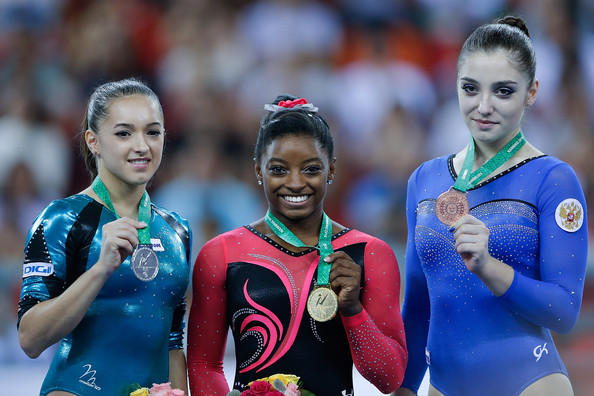 Men’s high bar
European, World and Olympic Champion, Epke Zonderland (NED), is in a class of his own on high bar. He combines a Cassina with a Kovacs and a Kolman with a Gaylord 2 to get the highest score of the competition: 16.225! Uchimura (JPN) connects a Cassina and a kolman but takes a hop on his double-twisting double layout dismount. He wins the silver ahead of Moznik (CRO).
This concludes the 45th Artistic Gymnastics World Championships in Nanning, China! Next World Championships are in October 2015 in Glasgow, Scotland. 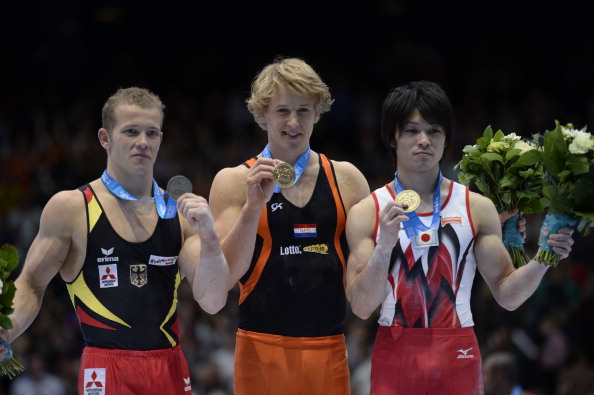