Injury forces Dipa to pull out of Doha World Cup 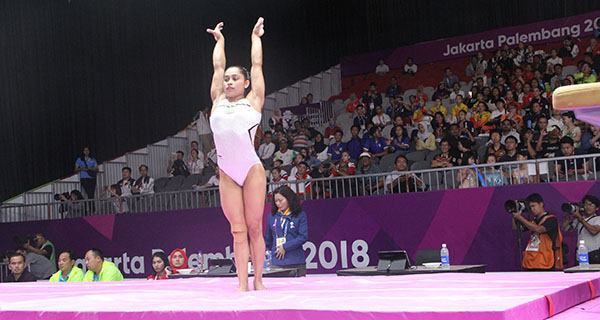 DOHA: Indian gymnast Dipa Karmakar has pulled out of 12th FIG ART Individual Apparatus World Cup, scheduled to be held here at the Aspire Dome from March 20.
The withdrawal is a big blow to her Olympic qualification plans as the two World Cups (Baku & Doha) are part of an eight-event qualifying system for the 2020 Tokyo Olympics, under which the gymnasts will make the cut based on their top three scores.
The 25-year-old, who became the first Indian gymnast to qualify for the final at the 2016 Rio Olympic Games, aggravated her knee injury during the vault final at the Baku Artistic Gymnastics World Cup.
She had finished last after deciding not to take her second attempt.
Dipa, who finished fourth in Rio Olympics, had performed a higher-difficulty ‘Handfront 540’ vault , scoring 14.466 and 14.133 points in the two qualifying round for an average of 14.299 to qualify for the vault final in the third position.
But she was left crestfallen after aggravating a knee injury while landing during the first attempt in the final.
“Dipa had some problems in her knee before the final. She was feeling some pain yesterday, but felt better after working with physio. She attempted the vault finals but fell on her first vault, aggravating the injury due to undesired landing,” Gymnastic Federation of India (GFI) official Riyaz Bhati told PTI. “She will now skip the World Cup in Doha and come back to India for rehabilitation and aim for Asian and World Championships this year.”
The Asian Championships will be held in Mongolia (June 13-16) while the FIG World Championships is in in Stuttgart (GER) from October 4-13.
Dipa had claimed a bronze in vault at the FIG World Cup in Cottbus (GER) in November last year to fuel her Olympic dream. It was her first appearance after recovering from a knee strain which had forced her to

Injury forces Dipa to pull out of Doha World Cup