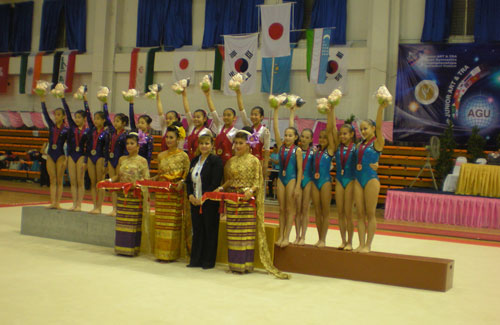 DOHA (QAT), AGU Office March 20, 2012: 3 subdivisions of 12 federations was present in the team and all-around finals and individual qualifications but in the end of the third subdivision, JAPAN (AZUMI ISHIKURA, MANASE ASHIKAWA, YUI MURAYAMA and YASUHA MATSUMURA) won the team final of the 12th ART Gymnastics Asian Championships which held in SUPHANBURI (THA) during 11-14 March 2012, with a total of 162.70 points ahead of Korea (157.00 pts) – Silver and the Uzbekistan, taking the Bronze (149.75 pts).
Japan was best on all apparatus, dominating the competition with the absence of China Team.