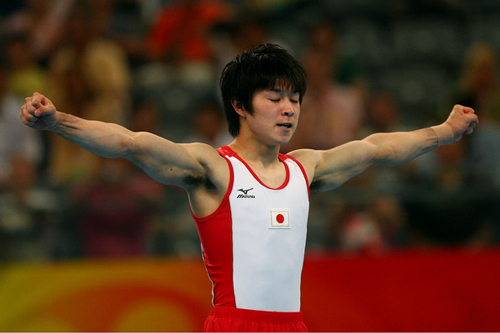 was crowned World Champion for the second consecutive year over Germany’s Philipp Boy and the USA’s Jonathan Horton. The Japanese aesthete put on a magnificent display of skill completely devoid of mistakes.
Starting with the Men’s event this afternoon, the one to beat was Japan’s Kohei Uchimura, reigning World Champion and top qualifier who won Silver alongside his compatriots in last night’s Team competition. Although suffering from a sore shoulder, Uchimura appeared strong and consistent all throughout this event, having qualified far ahead of the field.
Second qualifier, Philipp Boy of Germany, was the only one to perform on all six apparatus during the Team Finals, helping his team to unexpected Bronze. Remarkably, he was able to better every score during this Final, but it remained to be seen whether he could sustain the huge physical load.
Ranks three to seven were tight during the preliminaries, which made it hard to predict the Finals, especially when taking into account the utter exhaustion of these gymnasts. The podium was up for grabs with China’s Lu Bo, US American Jonathon Horton, Daniel Purvis of Great Britain, Korea’s Won Chul Yoo, Flavius Koczi of Romania and Russian Sergey Khorokhordin in promising positions.
Though the Qualifications gave a pretty good indication as to the main contenders, things didn’t turn out as expected and the scoreboards have been wiped clean for the Final. Everyone got a new start and another chance to prove their skill tonight.
The gymnasts were divided into four groups of six in tonight’s Final, depending on their Qualification ranking. The top six started on Floor and followed the Olympic order throughout the competition.
Uchimura took the lead after rotation 4 and did not let it slip away from him after that. With high difficulty and artistry, the world’s leading gymnast proved his excellence yet again tonight. Uchimura came through the competition without any major mistakes, impressing the crowd with his consistency. He topped the ranking on Floor, came in second on Pommel Horse, Still Rings and Vault, third on Parallel Bars and fourth on Horizontal Bar. When he performed as the last competitor on the bar, he needed a mere 12.874 to win. A true champion and favourite, Uchimura opted for full risk and nailed it! After 2009 he took off with the world title for the second consecutive time tonight and an impressive margin of more than two points.
Boy had to sweat it out until the last moment for this medal. Excelling on Floor, Pommel Horse and Rings, he experienced a setback on Vault, where a big step mauled his landing and resulted in a deduction to the Execution score. On his last two events, the Parallel Bars and the Horizontal Bar, Boy hopped on his dismounts, and during his Bar routine had a break on his ½ Takamoto. Exhaustion might have been a factor here. When his final score crested the ranking, and with Uchimura as the last competitor, he realised that he had just won Silver!
Horton, who made a slight improvement on the first three events, having qualified in fourth place, set the stage for his success tonight. Shock on Vault, however, when he took two big steps to balance out the landing of his triple front. After these four rotations Horton sat in sixth only. A terrific performance on Parallel Bars brought him back into the game and though he hesitated somewhat on Horizontal Bar, he managed to secure the Bronze tonight.
Bad luck for the Ukraine’s Mykola Kuksenko, who made a strong appearance during this Final after having qualified in 11th position. Kuksenko was in third position after rotation four and five, but finishing the competition on Floor, not his best apparatus, he fell behind Horton. The 21 year old finished on fourth place, having missed the podium by just a narrow margin.
Maxim Devyatovskiy will long remember his Pommel Horse routine tonight. Surprisingly, the Russian held second position after the fifth rotation and might have secured a medal tonight if he had aced his last routine. However, Devyatovskiy lost speed and got stuck on the apparatus, which cost him the medal. He ultimately fell back to rank 19.