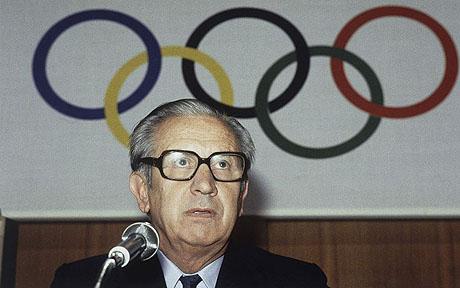 The Asian Gymnastics Union (AGU) extended its “sincerest sympathies and condolences” to the family and colleagues of former International Olympic Committee President Juan Antonio Samaranch, who died on Wednesday April 21,2010 at 89.
Widely credited with renewing and fundamentally changing the landscape of the Olympic Movement, Samaranch led the IOC for 21 years from 1980 until 2001, and was Honorary IOC President at the time of his passing.
Juan Antonio Samaranch maintained an intimate relationship with the international gymnastics community. In 1983, former FIG President Yuri Titov of Russia named him an Honorary Member. In 2006, incumbent President Prof. Bruno Grandi (ITA) made Samaranch the guest of honour at the festivities marking the 125th anniversary of the founding of the FIG in Geneva (SUI).
“I was very sad to hear about the death of Juan Antonio Samaranch, who transformed the modern Olympic movement into what it has become today” said AGU President Mr. Abdurrahman Al-Shathri
During his 21-year presidency, Juan Antonio Samaranch achieved the goals he had set for himself around the themes of unity, development and quality.
The unity of the Olympic Movement led in particular to:
– the inclusion of the People’s Republic of China, begun by Lord Killanin;
– the appointment of active athletes and International Federations’ and National Olympic Committees’ representatives as IOC members;
– the abolition of apartheid in sport, which allowed South Africa’s multiracial team to participate in the Olympic Summer Games in Barcelona in 1992; and
– the return of tennis to the programme of the Olympic Summer Games in Seoul 1988.
Development resulted in:
– an increase in the numbers of NOCs from 149 in 1980 to 199 in 2001;
– an increase in the number of sports at the Olympic Games from 21 in 1980 to 28 in 2001;
– the co-option of women as IOC members;
– the promotion of sports education with the creation of Olympic scholarships for
athletes and coaches;
– the participation of the best athletes in all disciplines, through an amendment of the Rule on eligibility for participation in the Olympic Games;
– the diversification of the financial resources of the Olympic Movement, which no longer depend only on TV rights;
– the promotion of the arts and sport, largely achieved through the construction of the
Olympic Museum.
His concern with better quality can be seen:
– in the intensification of the world-wide fight against doping, under the responsibility of the Medical Commission;
– in the creation of the World Anti-Doping Agency in 1999;
– in the creation of the Court of Arbitration for Sport in 1983, and an International
Council of Arbitration for Sport in 1993;
– through concrete actions to promote the protection of the environment, especially during the construction of Olympic venues for the Olympic Games.
A contribution to world peace
By strengthening the unity of the Olympic Movement to make it a leading social force of the 20th century, President Samaranch also made it his goal for sport to contribute to peace in the world. Upon the proposal of the IOC, the UN General Assembly unanimously voted in 1993 for a resolution on compliance with the Olympic Truce during the 17th Olympic Winter Games in Lillehammer. Since then, the UN General Assembly has repeatedly expressed its support for the IOC by unanimously adopting, every two years, one year before each edition of the Olympic Games, a resolution entitled “Building a peaceful and better world through sport and the Olympic ideal.”
An early interest in sport
As a teenager, he was interested in sport and sports development. He practised hockey, boxing and football. He did his studies at the Business School of Barcelona, and moved on to study in London and the USA. He obtained a diploma from the Barcelona Higher Institute of Business Studies (IESE). During his studies, he practised roller hockey, for which he created World Championships in 1951 in his hometown, and which the Spanish team won.

While helping to run the family business, he became a municipal councillor in 1954 in charge of sports, then a member of the Spanish Parliament in 1967. He served as national delegate for physical education and sports for three years. In 1973, he was appointed President of the Barcelona “Diputación” (Provincial Council), from which he resigned in 1977 upon being appointed Spanish ambassador to the Soviet Union and Mongolia by King Juan Carlos I, after the resumption of diplomatic relations between the two countries.
A man of the media
In the 1950s, Samaranch took an especially keen interest in the media, realising that, without the media, sport would be unable to achieve the popularity and high profile essential to exerting an influence in modern society. He began to work for the Barcelona evening paper La Prensa, for which he covered the Games of the XV Olympiad in Helsinki in 1952 and major football encounters in the Spanish League.
An active Olympic career
At the same time, he had an active career within the Olympic Movement. He was elected Vice-President of the International Mediterranean Games Committee (CIJM) for the second edition of the Games in Barcelona in 1955. On several occasions, he was appointed Chef de Mission: for the Winter Games in Cortina d’Ampezzo (1956) and the Summer Games in Rome (1960) and Tokyo (1964). For these last two Games, he was also President of the Spanish delegation.
Elected a member of the Spanish Olympic Committee in 1956, he was its President from 1967 until 1970. He was elected as an IOC member in 1966. Two years later, the then IOC President, Avery Brundage appointed him Head of Protocol (1968-1975 and 1979-1980). A member of the Executive Board (1970-1978, 1979-1980), he was IOC Vice-President from 1974 to 1978.
Elected to the IOC presidency in the first round of voting on 16 July 1980 at the 83rd Session, he succeeded Lord Killanin on 3 August that year. During 21 years, Juan Antonio Samaranch endeavoured to breathe new life into the Olympic Movement. On 16 July 2001, he handed over the IOC presidency to Jacques Rogge and became Honorary President.
Olympic.orgOfficial website of the Olympic Movement