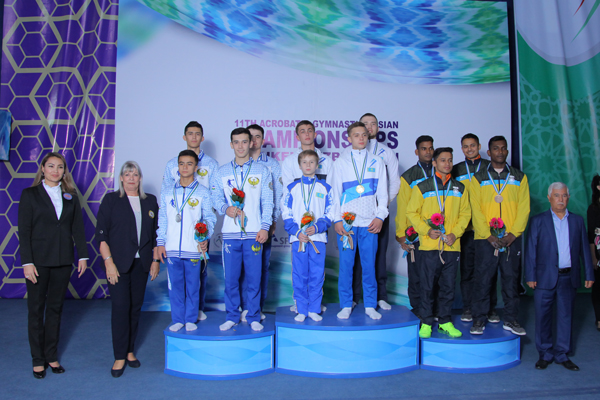 DOHA (QAT) AGU Office: Kazakhstan dominated at the 11th Asian Acrobatic Gymnastic Championships in Tashkent (UZB) by winning seven gold and two silver medals.
More than 120 men and women gymnasts from DPRK, China, India, Iran, Uzbekistan, Hong Kong and host nation took part in the competition from October 10 to 12.
The events were held in the different categories of men and women which also included the mixed pair in age-groups (12-18) as well.
Uzbekistan finished second in the competition with two gold and nine silver medals.
China, who are definitely not as strong in Acro as they are in other categories, managed one gold in the senior women’s group.
DPRK gymnasts Jong Kum Hwa and Ro Hye Song claimed gold in the women’s pair while Jo Kum Chon and Yo Ok Ryon bagged silver in senior mixed pair.
The Indians did well by claiming four bronze while Hong Kong claimed their only medal – bronze – in AG 12-18 women’s pair.
There were one joint winners — Kazakhstan duo Dil Daniyel and Shulyar Vadim shared the senior men’s pair gold with Uzbekistan’s Azizov Miraziz and Makhmudov Sharofiddin.
Both the pair were tied on 28,620 points.
Iran’s Darvishpour Alireza and Hayati Afshin took the bronze (22,780).