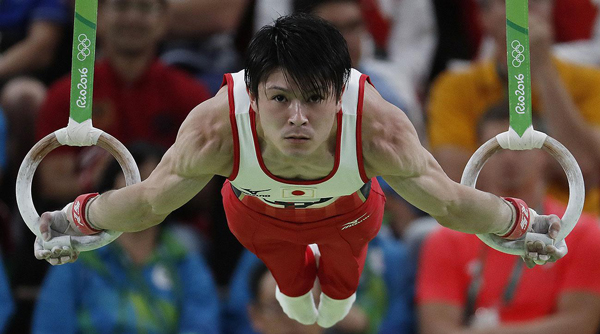 Doha: Hold your heart and breathe as the greatest gymnast of his generation Kohei Uchimura will descend at the Aspire Dome during the 11th FIG Artistic Individual World Cup from March 21-24.
The Japanese legend won the last six world all-around titles and the last two Olympic all-around titles, the longest streak of dominance in gymnastics history.
But the 28-year-old had missed out on his seventh successive FIG World Championships title in Montreal, Canada, last October following a bad fall in the second qualifying event.
The ace gymnast will be looking forward to the Doha competition, which will be a test event for the 48th FIG World Championships in October.
China’s current world champion Xiao Ruoteng, who succeeded the ‘King Kohei’ in Montreal, will also regale the hearts of the fans, who can get to watch the world’s best in the four-day competition, organised by the Qatar Gymnastics Federation and supported by the Qatar Olympic Committee.
Xiao became became the first Chinese to win a gold in a major global individual all-around competition since Yang Wei at the 2008 Beijing Games.
Xiao overcame a late deficit and posted a score of 86.933 as China sealed the top two spots in the standings, with Lin Chaopan taking silver on 86.448 and Japan’s Kenzo Shirai edging out Russian David Belyavskiy for bronze.
In fact, the Doha leg will be an interesting competition as all eyes would be on Uchimura, who will hope to acclimatise with the venue before the global event.
So far, around 100 MAG gymnasts have entered into the competition while 59 has been registered for the WAG events, with the world’s oldest Olympian Oksana Chusovitina being one of the top names.