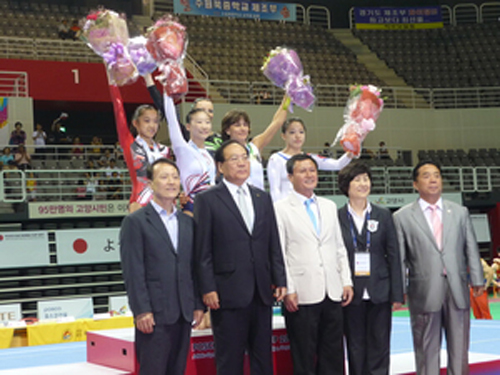 Doha (QAT) AGU Office July 18, 2011: Goyang City, South Korea – Gymnastics community gathered in Goyang City, South Korea, to compete at Korea Cup; where gymnasts from different countries were invited to participate. Jointly, a FIG Technical Comitee meeting was held, with the invitation of the athletes’ representatives Nastia Liukin and Jani Taskanen. Early this week, archives and documents of the proposals by federations for the next quad code of points (2013-2016) were published by Gymnastics Canada. Earlier this year, Taskanen asked the gymnasts to send him their input about the Code of Points and proposals, but those were not leaked yet.
MAG
South Korean men, who disappointed at Japan Cup just a week before, impressed this time. Hak Seon Yang submitted a new vault, a handspring front 3/1 layout that recieved a provisional D value of 7.4. Yang performed this vault beautifully and effortless (E: 9.450) and won the gold medal with a Tsukahara 3/1 as a second vault. Thomas Bouhail from France finished half a point behind the Korean.
Yang Vault can be seen here

The other Korean shining at this competition was Hoon Ji Kim who won high bar with a 7.1 D score and execution of 8.775. His routine included a Kovacs, Kolman, Rybalko. In second place finished Chinese gymnast Chen Xuezhang (6.7 D, 8.175 E). Wang Guanyin (China) won parallel bars by a point over silver medalist Roman Kulesza (Poland). Wang had the highest D (7.0) and E (8,975) scores of the competitiors; while Kulesza only had a 6.0 difficulty score and matched Wang’s execution. In third position finished Japanese Shun Kuhawara (6.4 D, 8.775 E).
In the secon day, Eleftherios Kosmidis from Greece won the gold medal on floor. Kosmidis, had the most difficult routine (6.7) of the participants and had an execution of 8.925 points. Daniel Purvis (Great Britain) finished in second place D: 6.5; E: 8.775. Olympic medalist Louis Smith obtained the second medal for the British delegation in Korea with a silver on pommel horse. Smith outscored specialist and European champion Kristian Berki, but the gold medal went to Chinese Zhang Hongtao. Berki and Smith had the highest D score, 6.7, but Zhang had the cleanest routine with a flawless execution of 9.350 (D: 6.6), Chinese men also dominated rings, Liao Junlin and Luo Xuan, went 1-2 in this final with Junlin having a better execution, 9.100 for 8.950 by Luo; both had the same D score of 6.8. In third position finished Taiwan’s Chen Chihyu with 15.475.
WAG
As usual, the women’s competition attracted a much modest field but there were shining moments. On vault, Korean Jo Hyun Joo won the gold medal with a ro – 1/2 on – layout 1/2 off first vault and a full twisting Yurchenko as a second vault. She downgraded this second vault from her usual double twisting Yurchenko. Oksana Chusovitina and Tomomi Iizuka (Japan) completed the podium. On uneven bars, five of the seven participants fell, the winner being Japan’s Asuka Teramoto who had a 6.3 D score and a low execution score of 7.975. Vasiliki Millousi from Greece finished in second position with 13.525; while Jessica López (VEN) finished in third position with 12.525. Deng Linlin from China won balance beam with the highest score of the competition (D 6.5; E 8.275), follwed by Asuka Teramoto (D 5.7, 8.1) and Jo Hyun Joo (D 6.1; E 7.250). Four participants fell in this final. Venezuela’s Jessica López continued her excellent season with a victory on floor (D 5.5; E 8.300) above veteran Polish Martha Pihan-Kulesza, who had a one tenth higher D score but a lower execution (8.175). 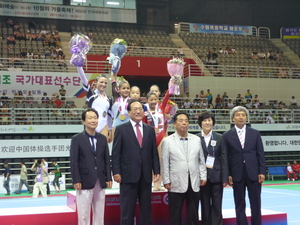