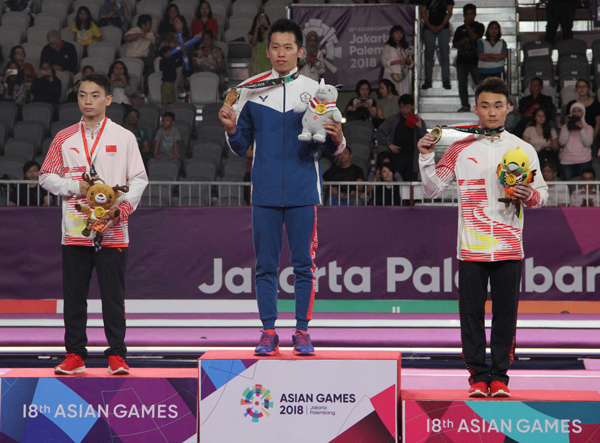 JAKARTA, Indonesia: Lee Chih Kai made history by winning the first-ever gymnastics gold for Chinese Taipei at the Asian Games when he finished ahead of his competitiors in the men’s pommel horse final here on Thursday.
The 22-year-old Lee, who also a silver in horse at the 2018 FIG World Cup in Doha, Qatar, in March, won the dream gold with an unscathed routine featured with highest difficulty and execution scores — 6.300 and 9.100 — for his 15.400 points .
China’s Zou Jingyuan (15.100) and Sun Wei (15.075) won the silver and bronze medals respectively.
“There’s no word to express my feelings now as I had always dreamt of a gold,” said Lee. “Last year, on the same day, I had won my first gold medal in pommel horse at the Universiade. I will never forget this date.”
Lee noted the floor exercise final before the pommel horse competition, in which he finished the fourth, actually proved to be a warm-up for him.
“I came on stage, knowing well I can do it, I’m all focused. And I made it,” he added. “My next goal is Tokyo Olympics. I have one of the most difficult routines on pommel horse and I will go all out for it.”
Lee, who will also compete in the parallel bars final on Friday, reached the final of the vault as the top finisher in the qualification, followed by Zou and Sun.