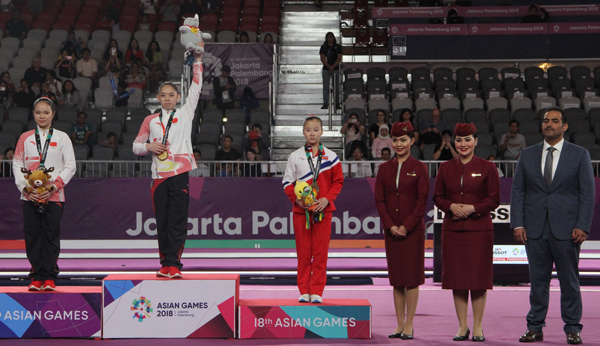 JAKARTA, Indonesia: Liu Tingting has always been a picture of confidence.
She demonstrated it with a steely nerve as to why she’s been hailed as the next top star in this new generation of Chinese gymnasts after winning the women’s uneven bar final at the Asian Games on Thursday.
The 17-year-old outclassed compatriot Lui Huan and silenced her toughest rival North Korea’s Jang Mi Jon, whose score was only 0.4 points short of the former’s achievement at 14.6 points.
Hampered by a foot injury during the 2017 FIG World Championships in Montreal, Canada, Liu came back into the sport strongly by winning couple of medals at the FIG World Cups.
Her gold-medal feat will surely motivate her to do well at this year’s World Championships in Doha.