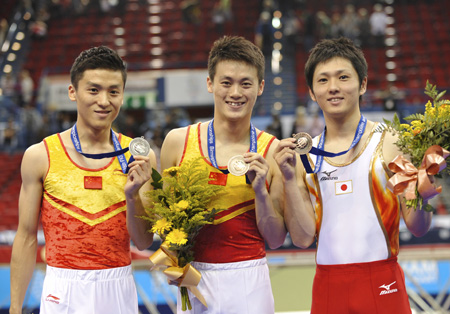 Doha (QAT), AGU Office, November 24, 2011: The start list for last night’s Individual Men’s Final featured all the names one has come to recognize as the trampoline hierarchy. It could be argued that the only names missing were Jason Burnett (CAN), below par due to injury and Ye Shuai (CHN) eliminated by his own countrymen Lu Chunlong and Dong Dong. Joining these two Chinese gymnasts on the start list were Russians Nikita Fedorenko and Dimitry Ushakov, Masaki Ito and Yasuhiro Ueyama (JPN) and the French European Champion Gregoire Pennes.
First to jump was the diminutive Japanese power pack Ueyama who looked somewhat unsettled as he strove to control his straight jumping. He seemed to take off on a random jump and his early elements were high but lacking their normal definition. It was no surprise when he came to grief on the end mat after four skills. Ushakov (RUS) followed with a brilliant high start which he sustained to the half way point before making a catastrophic misjudgement, terminateing his bid to become World Champion. Gregoire Pennes (FRA) was the first finalist to deliver a seventeen plus DD and had he managed to retain the height of his first five skills, he would have been a medal contender. He nevertheless took the lead as the evergreen Yuriy Nikitin (RUS) prepared his assault on the title. The 2004 Olympic Champion bettered the Frenchman’s execution and time of flight scores to take the lead. Nikita Federenko (RUS) took all the scoring elements a step higher and we waited to see if he had scored enough to challenge the three Asian gymnasts still to jump. First up was World Cup Champion Masaki Ito (JPN) who performed a thrilling exercise and received the accolade of 8.9 from the three execution judges!
Olympic Champion Lu Chunlong faced a formidable task if he was to take the lead, but his stunning performance of amazing height, elegant form which centered in the “sweet spot” took clear of Ito by 1.2 marks. All that remained was for current World Champion Dong Dong (CHN) to weave his customary magic and retain his title. The Ch
ampion did not shirk his responsibility and entertained the packed arena with a typical Dong Dong delivery. But would the scores award him the crown, DD score….higher. Execution score…..lower. Time of flight……lower! Lu Chunlog was the new World Champion!
This was a great final and provided an important lesson for all coaches and trampoline gymnasts. The winner had 0.7 less DD but he had 0.7 more for execution. These two factors cancelled each other out, but Lu had 0.685 more time of flight! Could his 0.7 advantage in execution also be the result of increased time of flight? What do you think?

Gold – LU Chunlong (CHN)
“I am so happy that Birmingham witnesses my best performance since 2008.  As you know I have been through ups and downs since the Beijing Olympic Games.  In this year my results keep going up!  I hope I can take part in the Olympic Games and get a good result.  I also hope that I can perform well in the Test Event in London in January.”

“I think that I performed better than yesterday.   But I can’t say that I am totally rid of the shadow of Friday’s competition. But as an athlete you have to make some mistakes and failures and I have to just face in and re-adjust myself psychologically and physically to perform well.  Failure is not a bad thing, it just reminds myself that I should work harder and put more attention into the details in daily training.  I also hope to get a place in the Olympic Games and perform excellently for the audience.”