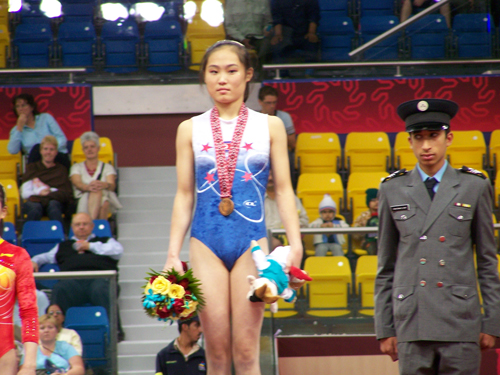 Doha (QAT) – AGU Office, November 5, 2010: Gymnast Hong Su Jong, representative of the Gymnastics Association of the Democratic People’s Republic of Korea (PRK), was registered from 2003 to 2010 in international competitions using three different birth dates: 1985, 1986 and 1989.
The first traces of falsification were identified for the 2003 Universiades of Daegu (KOR), where said gymnast used the March 9, 1985 date of birth. According to the official regulations of the International University Sports Federation (FISU), the minimum age required for participation is 17 years as of January 1, 2003.
The Disciplinary Commission of the International Gymnastics Federation (FIG) opened an investigation, the conclusions of which were ultimately submitted to the FIG Presidential Commission.
The FIG Presidential Commission confirms the proposal made by the Disciplinary Commission to suspend gymnast HONG Su Jong and the Democratic People’s Republic of Korea National Federation for a period of 2 years, from October 6, 2010 to October 5, 2012, and to forbid from participating  in any capacity in any competition or activity authorised or organised by the FIG, any Union, any National Federation, any club or in any international event (incl. national for the gymnast), and to sanction the PRK National Federation to pay a fine of CHF 20’000.-.
The FIG’s decision is a clear signal to those who would wilfully disregard the current rules surrounding gymnast age. The health of its athletes and respect for the law are among the International Gymnastics Federation’s highest priorities.
The PRK-NF and the gymnast may appeal in writing to the FIG Appeal Tribunal within 21 days of notification of this decision.