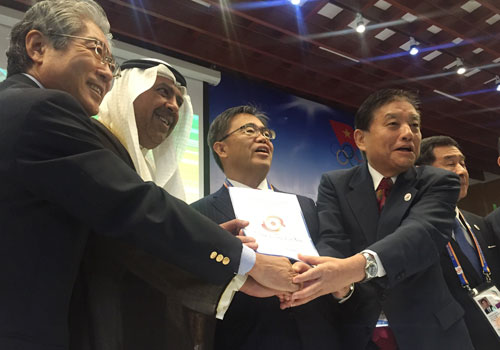 AGU Office Doha (QAT) September 29, 2016: The city of Nagoya and Aichi prefecture in central Japan will host the Olympic Council of Asia’s 20th Asian Games in 2026. The bid from Aichi-Nagoya was approved by the 35th OCA General Assembly at the Royal Lotus Hotel and Convention Centre in Danang, Vietnam, on Sunday 25th of September, 2016, securing the OCA’s showpiece event for the next 10 years following Jakarta-Palembang, Indonesia, in 2018 and Hangzhou, China, in 2022.

The OCA President, HE Sheikh Ahmad Al Fahad Al Sabah, thanked the commitment of Nagoya and Aichi and said: “The road map of our main event is very stable. Together with our three Asian Games in 2018, 2022 and 2026, the Tokyo 2020 Olympic Games and the next two Winter Olympics in Korea and China in 2018 and 2022 respectively, the sports calendar of Asia will be very busy with continental and international events.”

The President of the Japanese Olympic Committee, IOC member Tsunekazu Takeda, introduced the city of Nagoya and the prefecture of Aichi to the delegates at the General Assembly and highlighted the industrial and economic strength of the region. The Governor of Aichi prefecture, Hideaki Ohmura, described Nagoya as a leading sports city in Japan with a population of 7.5 million.

The first theme of a five-concept Asian Games 2026 will be “Athletes First”, and excellent sports stadiums already exist such as the Mizuho Athletics Stadium, Toyota Stadium, Rainbow Hall and Rainbow Pool, Komaki volleyball arena and Nagoya Dome. The Main Media Centre will be located at the Nagoya International Exhibition Hall, and the total Asian Games budget was presented as USD842 million.

The Mayor of Nagoya, Takashi Kawamura, surprised the meeting by serenading delegates with a version of an Elvis Presley song: “Wise men say, only fools rush in. But I can’t help falling in love with Asian people, Asian Games in Nagoya and Aichi.

” His brief karaoke session was given a warm round of applause, prompting Sheikh Ahmad to ask: “Are we voting for the city or the song?” The Asian Games was first held in 1951 and this will be the third edition to be staged in Japan, following Tokyo in 1958 and Hiroshima in 1994.