Oksana wants to participate in her eighth Olympics 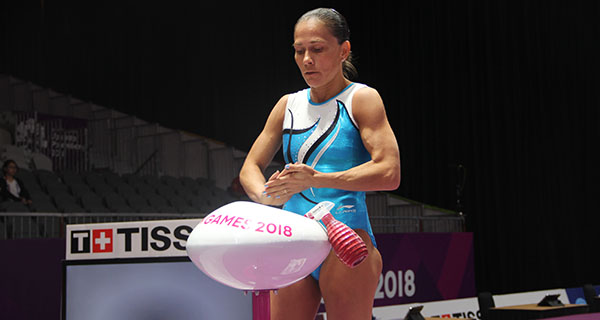 JAKARTA, Indonesia: There was a loud cheer for Oksana Chusovitina before the start of the women’s vault qualifications at the Asian Games here at the Jakarta International Expo on Tuesday.

She would be aiming to win a medal in vault, but a tough competition is expected given the presence of some of the finest Chinese gymnasts in the event.

In fact, she deserves every bit of applause and adulation because of her boundless energy and a child-like curiosity to learn even at 43.

The oldest female gymnast from Uzbekistan in the competition still competes and that too in a field of gymnasts who would be her son’s age.

She made ample clear of his goal and dream – 2020 Tokyo Olympic Games, but before that fans in Doha can expect her to see in action at the FIG Artistic World Championships in October.

“I want to go to Tokyo. It’s my dream to compete in another Olympics,” said Oksana, whose first Olympics was at the 1992 Barcelona Games.

The mother-of-one became the first gymnast to compete in seven Summer Games when she appeared at Rio 2016.

Oksana, who qualified for the vault and beam final here, is still hopeful to be in Tokyo two years from now.

She was outstandingly brilliant on the beam as the much younger field of athletes watched every move, action and a perfect landing she did on the vault and bar.

A favourite with the fans and co-athletes, Oksana, who first competed in 1987, is a perfect brand for women’s gymnastics as the announcer keeps on reminding her achievements in the sport.

Oksana first competed for the Soviet Union in the 1980s, before she went to the Barcelona Games for the Confederation of Independent States — a unified team of former Soviet states — where she won gold.
During the 2008 Olympics in Beijing, she had switched to Germany after moving there to treat her son Alisha, who was suffering from leukaemia.

Oksana wants to participate in her eighth Olympics