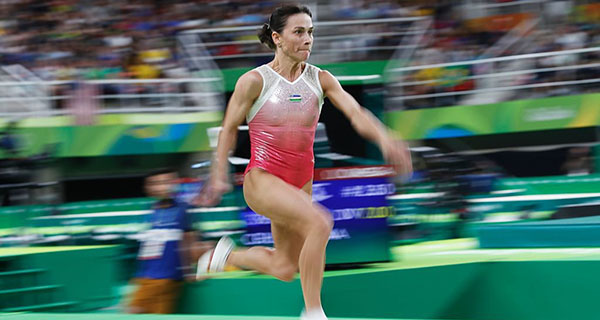 Doha (Qatar), AGU Office: Uzbekistan’s Oksana Chusovitina claimed a gold and bronze at the FIG Artistic Gymnastics World Cup in Baku, Azerbaijan, which concluded on Sunday.
The Uzbek, who competed in her record seventh Olympics at Rio in 2016, picked up a gold medal on the opening day in women’s vault.
The 42-year-old scored 14,300 points followed by Azerbaijan’s Marina Nekrasova (14.216) and Tyasha Kiseleff (Slovenia, 13,833).
Regarded as one of the best in her era, Chusovitina, who finished fifth at the FIG World Championships in Montreal, Canada, last year, added her second medal by winning a bronze on the women’s balance beam.
She finished behind Chinese duo of Luo Huan (13,400) and Jiaqi Liu (12,933), almost half her age, scoring 12,866.