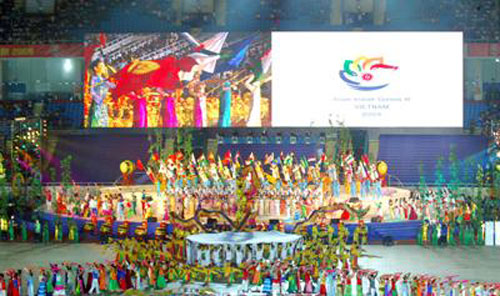 State President Nguyen Minh Triet declared the start of the 3rd Asian Indoor Games (AIG III) at its opening ceremony in Hanoi on October 30.
The ceremony was attended by many Vietnamese and foreign officials and athletes from 42 Asian countries participating in the event.
In his opening speech, Chairman of the Olympic Council of Asia (OCA), Sheikh Ahmad Al-Fahad Al-Sabah, said that the successful hosting of the Southeast Asian Games (SEA Games) in 2003 was testimony to Vietnam’s ability to organise other regional sporting event. He expressed his hope that the 3rd Asian Games will be successfully hosted by Vietnam again this time.
He said over the past years the OCA has made every effort to promote the spirit of the games and AIG III offers the chance for athletes from countries and territories in Asia to show off their abilities.
Hoang Tuan Anh, Minister of Culture, Information and Tourism, thanked the OCA for supporting Vietnam in organising the event. He said the hosting shows Vietnam’s responsibility for the Asian sport development and promotes cooperation and peace for a rising Asia.
Asian gold medallist Bui Thi Nhung carried the flame to light the Games torch. It was followed by spectacular fireworks displays at My Dinh National Stadium. Over 5,000 artists and dancers then participated in a special art programme.
More than 4,000 athletes, coaches and officials from 42 countries and territories will be competing in 20 official sporting events and one performance event during the 10-day games.
Competitions will take place at 27 venues in Hanoi, HCM City, Hai Phong, Bac Ninh, Hai Duong and Quang Ninh provinces.
This is the first time Vietnam has hosted such a continental event.
For more information we ask you to visit the official website of the event here.