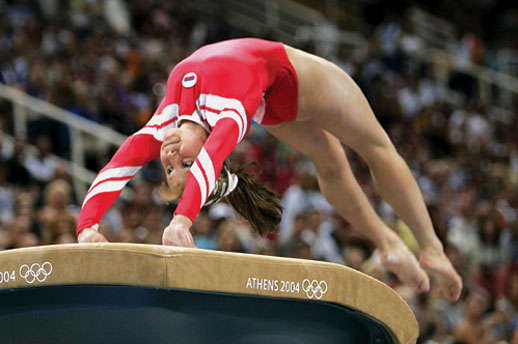 Doha October 02, 2011: AGU office; 28 October 2001 The revolutionary change from the old style vaulting horse to the new vaulting table was the result of a long re-evaluation process. Today, 10 years after the introduction of the “Pegases” at the World Championships Gymnastics in Ghent 2001
Ten years ago, on October 28, 2001, the vaulting table debuted at an official FIG competition. It was in Ghent (BEL) where the first Men’s qualifying subdivision was underway for the 35th Artistic Gymnastics World Championships. Quite an event!
Any kind of new equipment in gymnastics has become a rarity. Gymnasts are no longer as free in their choice of apparatus and competitive events as they were in the past, but the upshot to that is that we are seeing a markedly higher rate of stability than we did in the 1950s. The most recent major addition to the list of approved apparatus was definitely the uneven bars in Women’s Artistic. Co-invented by Richard Reuther and Rudolf Spieth in the early 1950s, a premiere demonstration of the bars was given by Vera Caslavska (TCH) at the 1965 World Gymnaestrada in Vienna (AUT), at Donau Park. That same year, the Women’s Technical Committee approved the apparatus, which by 1967 were being used officially for the first time at the Universiades in Budapest (HUN) and the European Championships in Amsterdam (NED), as well as in 1970 at the World Championships in Ljubljana (YUG).
A long re-evaluation process came to an end when the table replaced the vaulting horse. The abrupt change from tradition to contemporary has been a shock to some. And in that context, my compliments and deepest respect to the FIG Vice-President at that time, Siegfried Fischer (BRA), for fervently defending the new table as President of the Apparatus Commission.
Safety was the driving force behind the change.
There was no doubt that the vaulting horse presented acute accident risk for both women and men. Injuries were common and often very serious. The safety and health of our gymnasts is a daily concern, and an ancestral battle in gymnastics. October 2001 was a hugely satisfying time for me and a relief that many others in the gymnastics community shared.
It took years to design and complete the vaulting table, and I would like to give special mention to our apparatus manufacturing partners for their efforts and investment in the project. Their expert advice spared FIG numerous problems in designing the first prototype. The Pan American Union was the first to use the vaulting table experimentally, and the positive feedback we received from our gymnasts and their coaches was immediate.
Athletes in Ghent took hold of the “Pegasus” provided by official supplier Janssen-Fritsen and never looked back. The vault table was swiftly approved for the 2004 Olympic Games in Athens, in celebration of which the manufacturer presented a Pegasus table to each of the FIG affiliated federations. Their initiative was widely hailed in the gymnastics community.
Today, we remain vigilant with regard to safety. It is our responsibility both to ensure that the apparatus produced are of a high-quality and to advise our gymnasts, hold our coaches accountable, for the risk involved in performing poorly mastered elements, or those beyond an athlete’s ability.
But that’s a debate for another day.

Janssen-Fritsen proud to celebrate this anniversary with a special offer: 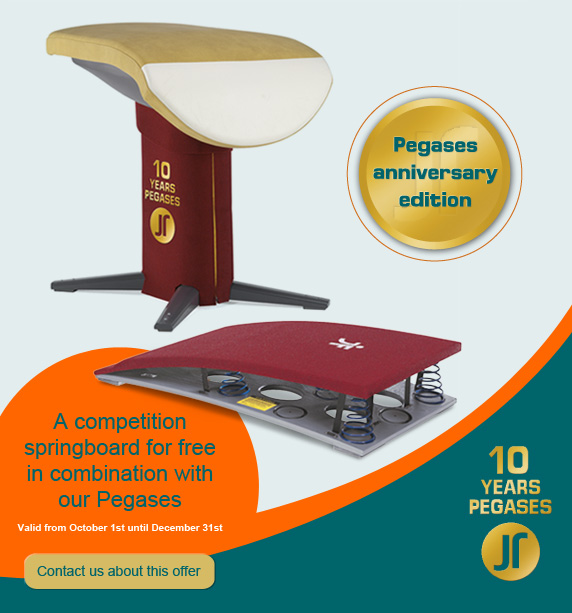