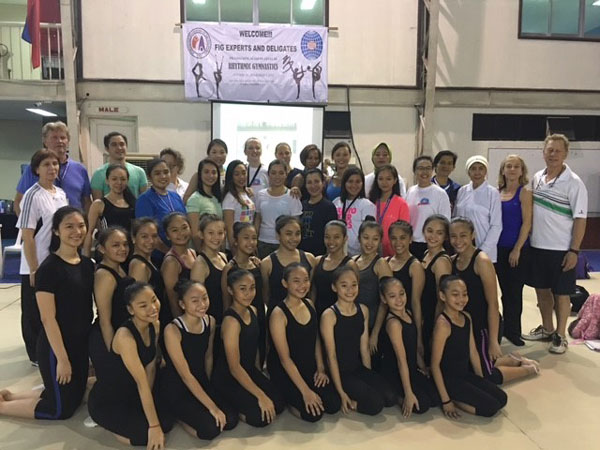 Doha (QAT), AGU Office November 15, 2016: From September 29 to October 5, the Philippines Gymnastics Federation hosted a Level 3 Academy in the capital city of Manila. It was the eighth Academy hosted by the Philippines, the 40th worldwide for Rhythmic Gymnastics and the 246th overall.
Nineteen coaches participated from seven FIG member federations – Australia, Canada, Indonesia, Malaysia. Philippines, Singapore and Thailand. Participation in this Academy was subsidised by the FIG Development Fund for the Asian Gymnastics Union (AGU) but only for the member federations of AGU.
Five FIG experts taught the practical and theory lectures and all were among the most successful and renowned persons in their fields. Three renowned experts taught all of the technical lectures. One was Nadya Alexandrova of Great Britain (2nd from right) who has been national coach for that country and for Bulgaria and is a member of the Academy Working Group for Rhythmic Gymnastics. Another was Dr. Marta Bobo (left) of Spain who is a renowned Rhythmic Gymnastics judge, coach and researcher and a frequent Academy expert. They were joined by music specialist Lasse Nettum (2nd from left) of Norway who presented several music lectures and helped coordinate the apparatus and body element work in each lecture with an understanding of music. The course leader was Dr. Keith Russell (right) of Canada who is the President of the FIG Scientific Commission and a frequent Academy expert for all disciplines. He taught most of the theory lectures. He was joined by Shayne Hanks (centre) of Australia who taught the psychology lectures.
None of the nineteen participating coaches met the stringent special eligibility requirements for the FIG Coaching Brevet and the required 85% on the combined theory and practical examinations.
The majority of participants had very good examination results on the two part theory and practical examination. The highest mark of 88% was achieved by Yin Wah (Carolyn) Au Yong of Malaysia. She was followed by Whynn Reroma of the Philippines and Cherrie Kwek of Singapore.
Once again we thank President Cynthia Carrion for her willingness to host another Academy in an excellent facility and with many demonstrator gymnasts and a wonderful support staff. Special thanks to Secretary General Bettina Pou who, as always, did all of the preliminary organisational work and assured all needs were met during the Academy.
The Academy programme continues with a Trampoline Academy that has already begun and is also hosted by the Philippines. Overlapping with this Academy was the 4th International Gymnastics Congress hosted by Portugal that included separate presentations and workshops for the three disciplines – Men’s (MAG) and Women’s Artistic Gymnastics (WAG), Rhythmic – of the FIG Age Group Development and Competition Programmes. The FIG coach education and Academy Programmes will remain busy right until Christmas. Another seminar for the MAG & WAG age group programmes will be hosted in Peru for the FIG member federations of South America. The working groups for the Trampoline and Rhythmic age group programmes will meet this month at the FIG Headquarters in Lausanne to prepare updated editions of those programmes. Qatar will host a Level 3 Academy for MAG & WAG and Australia will host a triple Academy for Aerobic-, Trampoline-, and Rhythmic Gymnastics.
FIG news