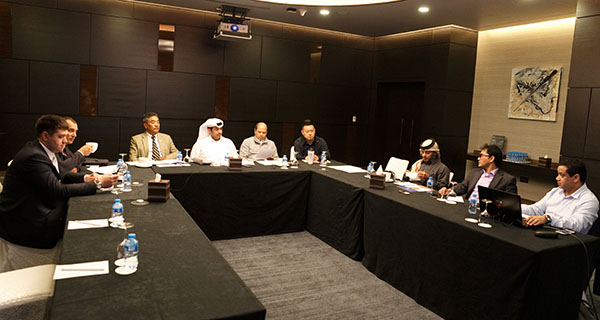 Doha (Qatar), AGU Office: The Asian Gymnastics Union (AGU) Presidential Commission at its recent meeting held here last Sunday had proposed the Executive Committee to upgrade or change certain articles in the AGU Constitution which they felt are not in sync with the time.

“Article 35.1, 35.7, 16.13, 44 are obstacles in the way of development. They need to be changed to make AGU a more professional body,” AGU President Abdurrahman Al Shahthri proposed to the members.

The Commission approved the agendas and presented to the Executive Committee later in the evening.

“Besides changing the Technical Committee rules, we also need change the calendar year. Till now, the AGU has been working from April-March schedule, but that’s not workable.

“By the time a new body is elected at the Congress in December, they assume their roles only in April and that’s a huge wastage of time. The members should resume office on January 1 rather than wait for the previous body to resign,” Al Shathri explained.

It was also decided to follow certain criterions while allocating the judges’ courses or FIG Academy to the AGU member associations.

AGU will give opportunities to countries who haven’t hosted the courses earlier besides the host nation’s experience in the past will be taken into account while distributing them to different federations.

“The AGU should also give priorities to those countries who’ve hosted more events. It’ll be some of kind of motivation for them, but also not ignoring any new member association,” said Dr Luo.