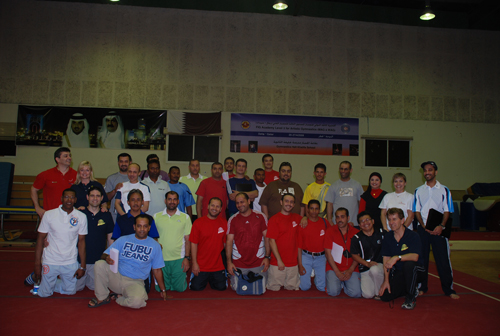 In the last week of April and only one week after a successful Level 3 Academy in Australia, the Qatar Gymnastics Federation also hosted a Level 3 FIG Academy for Artistic Gymnastics. It was the 58th Academy overall and the 40th Academy for Artistic Gymnastics since this coaching education program began in 2002. For Qatar, it was the fourth time to host an FIG Academy – all three levels for Artistic Gymnastics and the first ever Academy for Trampoline Gymnastics.
A total of 28 coaches from ten countries attended this Academy. There were 21 MAG coaches from Egypt, India, Indonesia, Iraq, Saudi Arabia, Qatar, Syria, Uzbekistan and Yemen as well as seven WAG coaches from Egypt, Indonesia, Iraq, Jordan, Qatar and Syria. The first time attendance of Uzbekistan brings to 95 the number of federations that have attended an FIG Academy. The course was conducted in English with translation into Arabic.
Except for the coach from Uzbekistan who qualified for direct entry into Level 3, all of the other coaches had had to have successfully completed Level 1 and Level 2 Academies in Malaysia, Egypt and Qatar as a prerequisite to enter the course.
Carol-Angela Orchard of Canada taught all of the women’s apparatus as well as choreography and Pedro Almeida, the Portugal Technical Director, taught all of the men’s apparatus. Ignacio Grande of Spain taught four theory lectures covering a wide variety of contemporary topics and Thomas Heinen of Germany taught psychology. The course leader was Hardy Fink the Director of FIG Education and Academy Programs. He also taught biomechanics and medical issues related to injury. This Academy marked the 50th that he has been responsible for organizing since his FIG position began in January 2005; making it almost exactly one Academy per month since then.
The course was held at a wonderful training centre associated with the Khalifa Primary School in Doha. It has a classroom directly above the gymnasium and located such that the gymnasium activities can be observed.
Three coaches met special eligibility requirements to attempt the examination for the FIG Brevet but none of them were successful in achieving the required 85% on the combined theory and practical examinations. The results in general were quite low for a Level 3 Academy but there were a number of exceptional candidates and results.
The highest results for MAG and for the course overall was achieved by Mazin ALMUSTAFA of Iraq. Only slightly behind was WAG coach Khaleel Taha AL¬KAWASMEH of Jordan.
The organization of the course was of the highest quality and all technical, audio-visual, and educational equipment as well as helpers was constantly available. Two extra MAG gymnasts from Uzbekistan and two WAG gymnasts from Syria were there to assure that the quality of demonstrator gymnasts was of sufficiently high quality for the Level 3 Academy content.
Thanks and congratulations go to the Qatar Gymnastics Federation and its new President Ali AL-HITMI and his team of workers, translators and gymnasts for organizing such a successful FIG Academy.