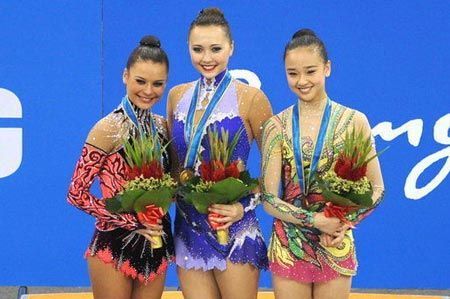 Doha (QAT) AGU Office, November 28, 2010: Anna Alyabyeva, took the Rhythmic Gymnastics Individual All-around title at the 16th Asian Games Friday in Guangzhou (CHN).
A talented gymnast, the 17 year old prevailed over a field of 18 finalists, scoring a total of 111.450 points, with Hoop being her best apparatus (28.650). Her final score in Guangzhou would have been enough to win her the Bronze medal at the World Championships two months ago in Moscow (RUS), where she actually placed seventh.
Uzbekistan’s Ulyana Trofimova confirmed her second rank of the preliminaries, having garnered 109.450 points, while Yeon Jae Son of Korea, fourth in the Qualifications, reached the podium in third with a total of 108.450. Alyabyeva’s team-mate Marina Petrakova, who was on medal course yesterday, finished fourth (107.000).