Doha (QAT), May 3, 2011: Upon the initiative of FIG President Prof. Bruno Grandi (ITA), the 130 FIG affiliated federations were invited to participate in a Symposium dealing exclusively with Rhythmic Gymnastics. A reworking of the Code of Points is in the wings and ready to get started for the 2013 – 2016 cycle. There is a pressing need for an initial evaluation of the current situation and strategizing to achieve the objectives set by the Federation, 80 of whose affiliated members practise Rhythmic.
In his introduction and speaking on behalf of a public opinion majority, the President of the FIG did not hesitate to put the responsibility where it belongs, saying that Rhythmic runs the risk of being stifled by a Code that is both cryptic and inaccessible to the general public. “Let your discipline be heard, let it express itself through and be inspired by music. It is melody that gives life and rhythm to the sport,” emphatically explained Prof. Grandi. “Beware of confusing difficulty and execution. Avoid monotony through the use of characteristics specific to each apparatus. Rhythmic is meant to surprise us with each exercise!”
While addressing an audience of forty, including coaches, judges and choreographers for the most part, Technical Committee President Maria Szyszkowska (POL) said she is committed to following closely the revamping of the Code of Points. “Rhythmic needs to encourage artistry cultivate body expression and spur technique.” She and her Committee want to hear what the public, media and, more particularly, television have to say; RG boasts all the audio-visual characteristics required for success within this media.
Objectives of a new Code
The Technical Committee has initiated a detailed review of the document. The Committee will consult with the federations on modification and update proposals in a first phase and prior to presenting a new document to the FIG Council for final approval in 2012. Among the issues discussed was the number of body difficulties, the introduction of dance sequences and more artistic expression with apparatus. The President intends to reduce the number of judges within the discipline and evaluate a given element one time only per exercise.
Warning
President Grandi then addressed members with clarity and determination on a few basic principles: he reminded members of the inherent spirit of sport and the justice that governs it, a concept that implies the idea of defeat. Drawing on several examples from the recent past he added, “Letting a gymnast in an Olympic final who drops her apparatus at the very last second of her exercise win the Gold medal is unacceptable. That is injustice of the worst kind!” admonished the President. “Each one of us must accept both victory and defeat. Such is the essence of sport!” He went on to emphasise that such situations give rise to a prejudicial view of Rhythmic and taint the credibility of the sport in the eyes of the public and media, not to mention the Olympic Movement as a whole. His warning could not have been clearer.
From this time forward, the Technical Committee will be drawing up a single document to include the observations and conclusions drawn from the Symposium, where everyone participating had a chance to express their views freely. President Grandi closed by expressing his deep satisfaction with what he sees as a unanimous commitment to developing Rhythmic Gymnastics, a beautiful and promising discipline. “Our gymnasts are artists of the truest kind. Let us give them a stage and the props necessary to expressing their greatest talent!” concluded the President. 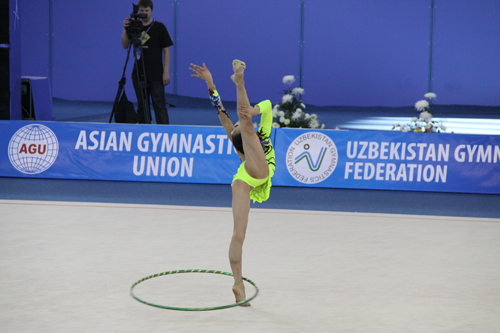