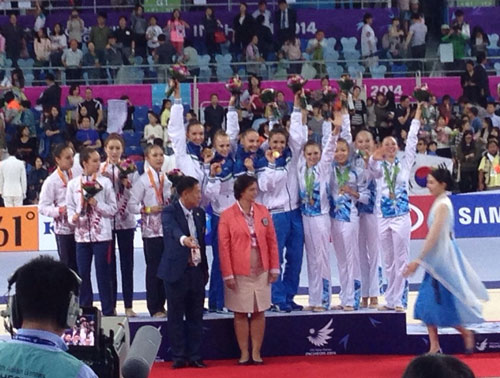 Incheon (KOR) AGU Office, October 01, 2014: Only 8 Countries participated in Rhythmic Gymnastics events of the 17th Asian Games such the THA – TPE – UZB – CHN – KAZ – KGZ – JPN and KOR .
The RG judges meeting was held in the morning of 01/10/2014 with the presence of the Mr. DE COSSIO Isabelle Anne Martine as FIG technical delegate and Gyozal Filippova the President of the AGU RG Technical Committee, Mr. Anis SAOUD AGU Technical Manager and Mr. Youssef Al-Tabbaa AGU Deputy Secretary General with the presence of 16 judges. After the roll call and welcome message we start the draw of lot for the judges for the competition I.

Uzbekistan was the best on all apparatus which gives them an advantage of 6 points in the team final score proved that they are the best team at the moment to Korean Team were performed exceptionally well were sitting in second position, pressing Kazakhstan to get the third place and the Silver medal with little bit more than one point.