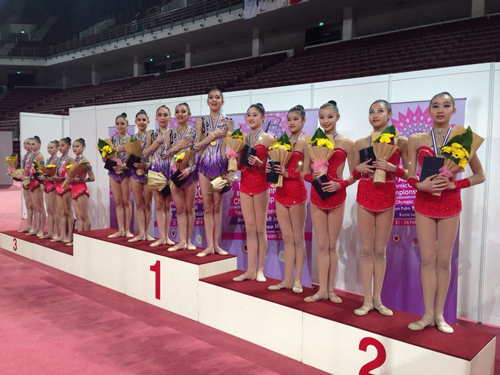 AGU Office, Doha (QAT) March 21, 2014: The junior Groups of Uzbekistan and China, Yeliizaveta Mainovskaya (KAZ), Anora Davlyatova (UZB), Olivia Tai (MAS) and Takana Tatsusawa (JPN) each won a berth for their country to participate in the Rhythmic Gymnastics events at the 2nd Youth Olympic Games (YOG) in Nanjing (CHN) this August.
The 13th Asian Rhythmic Gymnastics Junior Championships, which took place in Kuala Lumpur on February 21 – 14, served as qualifier for Asian countries for the 2014 YOG. The results of the qualification round and the General Competition respectively determined the three Individuals and one Group that gained a place for their country to compete in Nanjing. As the host country, China is automatically granted one place each for Individuals and Groups in addition to these places. However, none of the Chinese Individual gymnasts fulfilled the minimum requirements and the place was consequently allocated to the country with the next highest ranked gymnast, namely Japan.
Individuals and Team Competition
Kazakhstan’s Yeliizaveta Mainovskaya emerged on top of the 26 gymnast strong individual field that battled it out for the YOG qualification in Kuala Lumpur, after posting the highest scores with the Clubs (14.300) and Ribbon (14.400) on the second day of qualifications. Mainovskaya’s All-around total of of 56.700 points placed her in front of Anora Davlyatova of Uzbekistan, who ranked second with 56.100, and Malaysia’s Olivia Tai, who tallied 54.950.
Mainovskaya went on to win the competition’s All-around Final with a total of 56.250, outscoring Davlyatova (55.850) and Tai (55.650), who took Silver and Bronze respectively.
Uzbekistan was unbeaten in the Team Competition, scoring a 140.350 total to defeat Kazakhstan (137.050) and Japan (134.500) for the Gold.
Four different gymnasts prevailed in the Individual Apparatus Finals. Veronika Lyssogor (KAZ) won the Hoop, Shomuradova the Ball, Tai the Clubs and Takana Tatsuzawa (JPN) the Ribbon.
Groups
Scoring 14.250 with 5 Hoops and 14.517 with 10 Clubs, the Rhythmic Group of Uzbekistan ranked highest in both exercises and defeated China (28.150) and Kazakhstan (27.983) for the Group All-around title (28.767). Thus, the Uzbeks qualified to join host China in the Rhythmic Group event in Nanjing.
The Uzbek Group (14.250) continued to impress on 5 Hoops in the Apparatus Finals, taking the title over China (14.150) and Malaysia (12.867), while Kazakhstan clinched the Gold with 10 Clubs. With a score of 14.583, they left Japan (13.583) and China (13.450) in their wake.