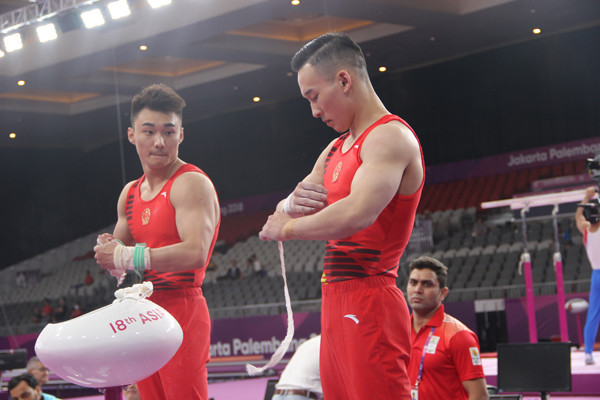 JAKARTA, Indonesia: Reigning all-around champion Xiao Ruoteng of China looked charged up at the routine podium men’s training for the Asian Games gymnastics competition here on Saturday.
The event will begin with the MAG and WAG qualifications on Monday and Tuesday respectively.
At the mandatory podium training, Ruoteng, who won the world all-around title at the 47th FIG Artistic World Championships in Montreal, Canada, last year is a firm favourite here to pick up couple of medals.
But he will face a stiff challenge as China were drawn along South and North Korea, Chinese Taipei and Thailand in a strong Group I at a draw ceremony held here on Friday.
The 22-year-old, however, will be hoping to regain his confidence before the Doha World Championships in October by winning medals here.
Japan, Indonesia, Kazakhstan, Malaysia and Vietnam are placed in Group II while Iran, which has their star athlete Saeed-Reza Keikha, mixed Group I, 2 and 5 respectively.
Keikha will be a tough nut to crack on pommel horse and it will be interesting to watch how Ruoteng comes up with ‘difficult’ executions to overcome the Iranian.
A lot will depend on Ruoteng’s skills and executions to guide his nation to top of the podium particularly after enduring an embarrassing third at the 2014 Games behind Japan and South Korea.
Meanwhile, the women gymnasts will get to acclimatize with the apparatus on Sunday, with defending champions China found themselves in an easy sub-division 3 which also has India, the host nation and Thailand.
North Korea, who won the team silver at the 2014 edition in Incheon, South Korea, are in sub-division 2 with South Korea, Vietnam and Chinese Taipei.
Japan, bronze medalist four years ago, are with mixed group 1 and 2 besides Kazakhstan.
Both the men and women’s team finals will be held on Wednesday.
The individual finals are on August 23 and 24 respectively, with the men will fight out for honours in floor, vault, pommel, rings, uneven and parallel bars while the women will contest in floor, vault, balance beam and uneven bar.