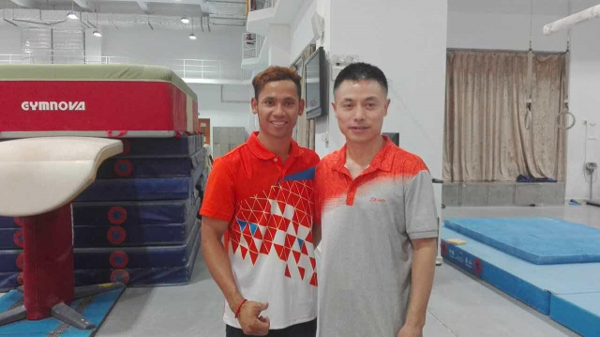 AGU Media, DOHA (QAT): Artistic gymnast Sam Rim will be the sole participant for Cambodia at the SEA Games in Kuala Lumpur, Malaysia, but the country’s gymnastics federation exuded confidence that Rim will get success following a four-month camp in
Shantou with the Guangdong Provincial Team in China.
“The training sessions in China really helped Sam Rim,” said Cambodian Gymnastics Federation (CGW) General Secretary Noy Sophanna.
“Winning a medal will be tough because he’ll competing against some of the best, but he’ll definitely produce a good result,” he added.
Besides the training sessions in China, which started from April 9, Sam also competed in some tournaments in Japan which helped him to develop his technique.
He will be competing in floor exercise and vault while Chinese coach Wang Yibing expressed satisfaction over the progress made by his ward.
Last year, the CGW had sent a three-member team of Sor Sopheng, Choeun Chanbory and Ms Sor Sokim to the FIG Aerobic World Championships in Incheon, South Korea.