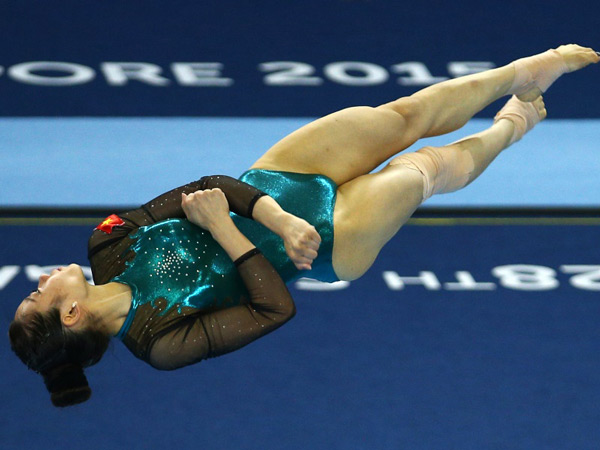 Dinh Phuong Thanh won the gold medal for men with a score of 86.150 on the six apparatus. His countryman Pham Phuoc Hung won the silver and Singapore’s Gabriel Gan took the bronze.

Phan clinched her sixth SEA Games gold medal in her career and her second in the all-around category but the wait to defend her title was much longer than she ever expected because gymnastics has not always been on the 2013 SEA Games schedule.

Phan actually had won her first SEA Games gold medal in 2007, on the vault, as a 15-year-old, but had to wait another four years before her next appearance.

When gymnastics was re-included in 2011, Phan was already an international star after finishing third in the vault at the world championships in Tokyo.

At the SEA Games, she showed why she is the region’s best female gymnast, winning three gold medals, in all-around,   vault and floor exercise.A year later, she won her first Asian title in the vault, denying a Chinese sweep of the women’s gold medals at the Asian championships.

Phan was twice named Vietnam’s athlete of the year and has set her sights on another big haul at Singapore’s Bishan Sports Hall.

She had been hoping for six medals, but that was revised to five after Vietnam finished fourth in the team event. After winning the gold in the all-around she still has the four individual apparatus to go and has strong claims in each.
She won a silver medal in balance beam and a bronze in vault at last year’s Asian Games. Earlier this year, she won gold in the beam and silver in the vault at the Doha round of the World Challenge Cup.