Doha (QAT) AGU Office: October 07, 2013: All-around champions Simone Biles (U.S.) and Kohei Uchimura (Japan) each added a second gold medal to their haul as the world championships ended Sunday in Antwerp.
Uchimura, who won an unprecedented fourth consecutive all-around title on Thursday, tied Chinese newcomer Lin Chaopan for the title on parallel bars. Uchimura had just barely qualified for the final on parallel bas, tying for eighth with Dutch gymnast Epke Zonderland.
Lin nailed his routine and said he was thrilled to tie for the title with the legendary Uchimura.
“It’s a great honor to share the gold with Uchimura,” said Lin, who just turned 18 on Aug. 27. “It’s just like a dream.”
2012 U.S. champion John Orozco won the bronze, less than a year after tearing his ACL.
Olympic champion Zonderland,from neighboring Netherlands, showed off a 7.7 D-score to take first world title title on high bar (Cassina to Kovacs; Kolman to Gaylord II; stuck layout double-double). All-around bronze medalist Fabian Hambüchen picked up silver, his ninth world medal.
Uchimura also added the bronze on high bar, his 13th world medal overall (six golds, three silvers, four bronzes) since his debut in 2009.
Olympic champion Yang Hak Seon (Korea) defended his world title on vault with his namesake triple-twisting handspring layout front. Although he submitted a 3 1/2-twisting Tsukahara to Code of Points, Yang decided not to risk it and instead threw his standard triple-twisting version.
American Steven Legendre, competing in his fourth consecutive world championships, took second with a Dragulescu and Tsukahara double pike.
“I am ecstatic,” Legendre said. “It has been an elusive medal, to say the least. This is my fourth world championships and I’ve been in the finals every year. This is the first medal I have gotten and it feels great. Neither of my vaults was perfect, but I put my feet down pretty well and that turned out to be enough.”
2012 British Olympian Kristian Thomas won his first world medal with the bronze (Yurchenko double pike and handspring double front).
Russian star Aliya Mustafina surprised herself with the gold on balance beam over Americans Kyla Ross and Simone Biles. Mustafina, who was first up, performed her most confident routine in Antwerp and watched as the remaining seven gymnasts failed to outscore her.
“If someone had told me beforehand that I would be world champion on balance beam I would not have believed it,” said Mustafina, who qualified eighth the final. “I would have said, ‘No way!’ I did not expect this gold!”
Mustafina is now the first gymnast since compatriot Svetlana Khorkina to have won a world championships medal on every event.
Ross, the runner-up in the all-around and on uneven bars, took her third silver on the balance beam, .067 behind Mustafina.
“It was one of my best beam routines, and although it hurts a little bit to come up short, I am proud of my overall performance,” said Ross. “This world championships has exceeded my expectations. I didn’t really know what to expect with my first World Championships, and I was just excited to be here and have the opportunity to compete in the all-around.”
The bouncy Biles added the floor exercise title (tucked double-double and double layout-half) to go with her all-around title, vault silver and balance beam bronze.
“All the hard work has paid off,” Biles said. “It is so exciting to be part of that. I cannot ask for anything more.”
Veteran Vanessa Ferrari performed well to take the silver, showing a tucked double-double followed by a full-in, back tuck combination. Larisa Iordache won Romania’s lone medal with the bronze.
The 2014 World Championships take place in Nanning, China, and will be the first step toward qualification to the 2016 Olympic Games in Rio de Janeiro. 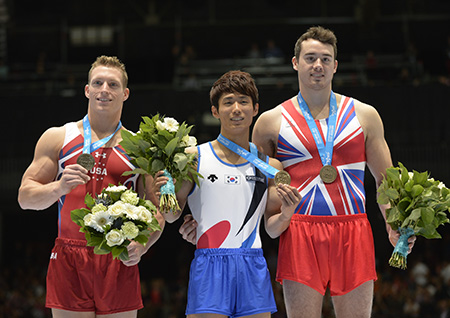 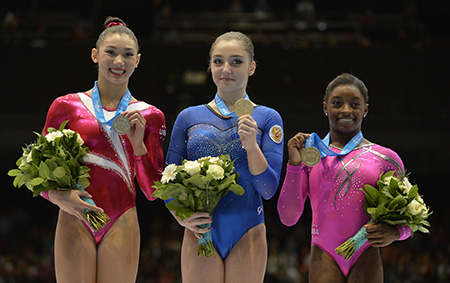 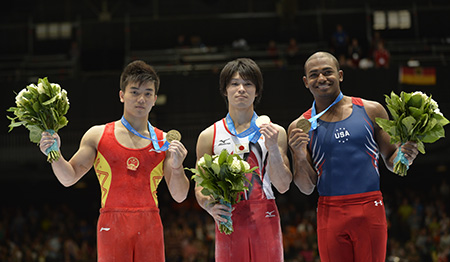 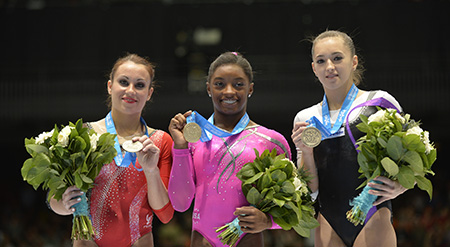 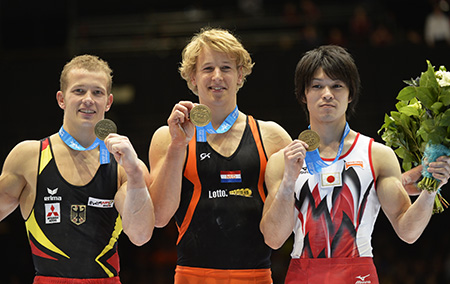