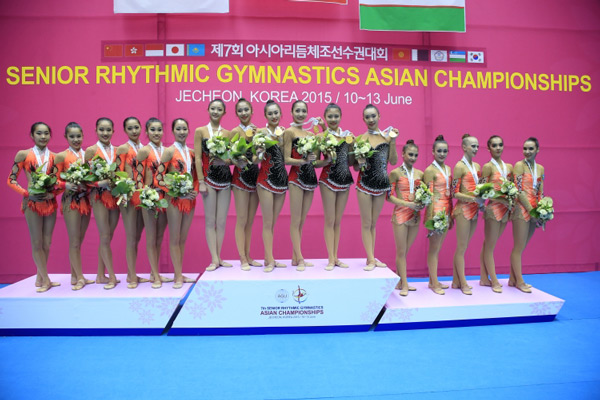 Doha (QAT), AGU Office: June 11, 2015: The Second day competition dedicate to the individual team final, group qualification and Individual Qualifications for Apparatus Finals. Shows also the domination of the beautiful Korean’s SON Yeon Jae in the 2 others Apparatus, Clubs with 18.200 pts followed also by the Uzbek NAZARENKOVA Elizaveta with 17.800 pts and SERDYUKOVA Anastasiya with 17.750 pts.
On the Ribbon also the Korean’s SON Yeon Jae with 18.150 pts followed by Japanese HAYAKAWA Sakura and the Uzbek SERDYUKOVA Anastasiya with 17.550 pts.
The result for the qualifications to the Individual All-Around is normal to be dominated by SON Yeon Jae with a total of 54.450 pts followed by NAZARENKOVA Elizaveta from Uzbekistan with 53.200 pts and then SERDYUKOVA Anastasiya with 52.650 pts.
The Group qualifications was dominated finally by China with 34.050 pts in total for 5 Ribbon and 6 Clubs with 2 hoops followed by Japan with 33.600 pts and then Uzbekistan with 33.550 pts.