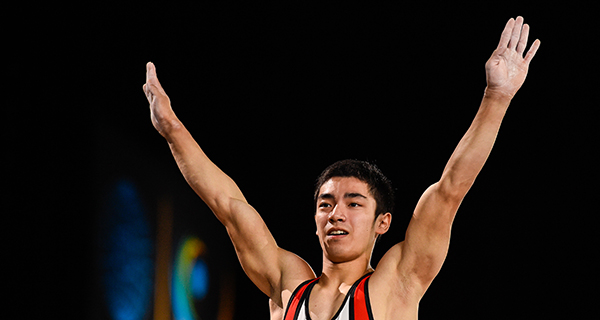 Doha (Qatar), AGU Office: Japan topped the men’s ranking list in the All-Around World Cup series after ahead of the USA after the four-leg tour in Artistic Gymnastics concluded in Tokyo last week.
Thanks to five-time world champion Kenzo Shirai’s excellent performance in his native country, Shogo Nonomura’s victory in Birmingham and a third place for Yusuke Tanaka, the 2014 world bronze medallist, in Stuttgart, helped Japan pip USA.
At each of the four events in Chicago (USA), Stuttgart (GER), Birmingham (GBR) and Tokyo (JPN), points were attributed to countries according to the ranking of their best-placed gymnast.
The country which totalled the highest number of points thus won the series.
China was sixth on the list finishing behind Russia, Germany and Ukraine.
Shirai, who won All-around bronze at the 2017 Worlds in Montreal, had started the series with a sixth-place finish in Chicago.
But he signed off with the gold, scoring 15.200 on floor, where he is a three-time world champion.
Shirai then came first on the horse and vault to earn an overall score of 86.064.
Compatriot Wataru Tanigawa stood on the step below him on the podium (84.399).
Shirai came second on the individual gymnast ranking behind China’s Sun Wei, who was the highest prize money earner.
Nonomura finished fifth with two others while Tanaka ended 13th.
On the women’s side, Japan’s Mai Murakami finished second while China’s Zhang Jin was joint fourth with USA’s Morgan Hurd.
Murakami had started in Chicago with a silver medal, but she outshone her rivals on three of the four apparatus – ranking first on vault, beam and floor.
The gold medallist on floor at the 2017 Worlds, she underlined her confidence and control by executing the routine with the highest difficulty en route to an overall score of 56.532.