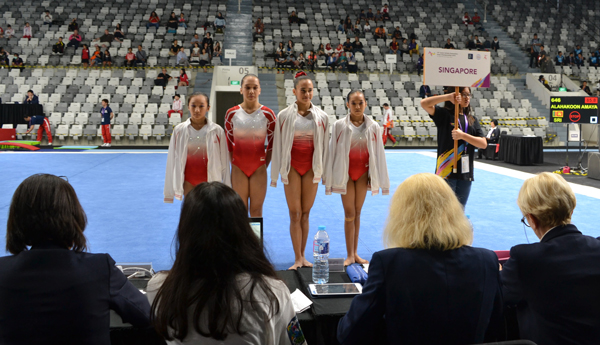 Lim Heem Wei is the only Singaporean gymnast to qualify for the 2012 London Games, and was the first-ever from her country to qualify for an Olympic Games.

With government support pouring in, Singapore is trying hard to develop the sport at the grass root level while the consolidated ideas generated by their team of experts may just see talented gymnasts from the country.

SG General Manager Karen Norden, the driving force behind the strategic goals that hopes to bolster the sport in the country, exuded confidence.

“The government is very supportive and the future looks quite promising. We also have an excellent team. If we develop Singaporean coaches, I don’t see why we can’t compete with the best,” said Karen.

The plan reaffirms the mission, vision and values and sets out high-level strategic goals for the next three years.

The 55-year-old sounded positive on the growth after SG hired some proven professionals including with Lim as one of the three new sport development managers last year.

“Our gymnasts are as talented as any other athletes in the world,” said Karen, whose 11-year tenure at Gymnastics Australia saw the membership grew by 10 per cent.

Tamara to represent Singapore at YOG
Meanwhile, Tamara Anika Ong will represent the country at the 3rd Youth Olympic Games (YOG), scheduled to be held in Buenos Aires, Argentina, from October 6-18.

“I feel extremely honoured and proud to be able to represent Singapore. On a personal level, I am very excited to compete in the competition,” said Tamara, who is currently based in Melbourne, Victoria.

She will be competing at the women’s artistic gymnastics in vault, uneven bars, balance beam and floor.

“I have been training hard and really want to do well at the Games. I hope all Singaporeans will cheer for me,” she added.

YOG will be Tamara’s first major competition and she is extremely excited about competing alongside the world’s best gymnasts on the same stage.

She is currently completing her year as a 9th Grader and also trains under coaches Timothy Lees and Jackie Caldwell at Methodist Ladies College.