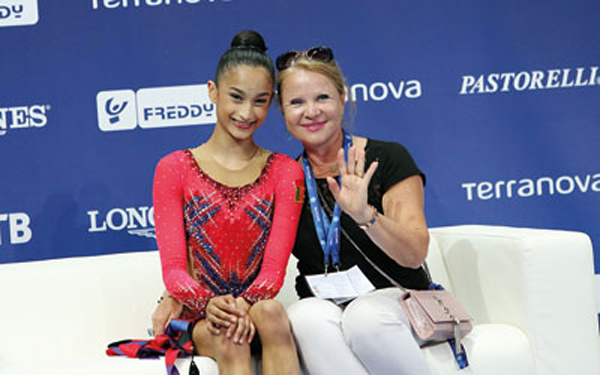 Doha (Qatar), AGU Office: Anna-Marie Ondaatje became the first Sri Lankan to compete in rhythmic gymnastics at the Commonwealth Games in Gold Coast, Australia, said pursuing gymnastics as a career was like ‘love at first sight’.

“As soon as I started rhythmic gymnastics I fell in love with it. I loved everything about it, from the expression to working with the apparatus and the fact that it involves a lot of ballet. I also love the movement of the body,” said Anna-Marie.

She first got into the sports when she was nine years old. She had wanted to be an artistic gymnast, but her father who had watched rhythmic gymnastics on YouTube, encouraged her to join it.

Anna-Marie always wanted to represent her country in a top international event and that opportunity came at the Commonwealth Games, where she made it to the all -around finals and the event finals.

Though she didn’t finish on the podium, it was her experience which should enrich her career.

“I couldn’t start my training till I reached Australia. The pain had worsened during the 28 hour flight from Canada to Australia. I couldn’t bend forward or backward. So I consulted the physiotherapist and doctors who helped me out,” said the youngster, who’s currently based in Toronto, Canada, where she competes at the provincial and national levels.

Anna-Marie is coached by Svetlana Joukova since 2016.

Svetlana has been a rhythmic gymnastics coach for 15 years in Russia, and 20 years in Canada and has been a national coach for Canada since 1997.

“She is a member of Kalev Rhythmic Gymnastics club which produced Olympians and Commonwealth Games medalists. At the same time, she studies hard and achieves great marks in her school education program. She is very dedicated to Rhythmic Gymnastics and competes in this sport with all her passion and strength,” said Svetlana.