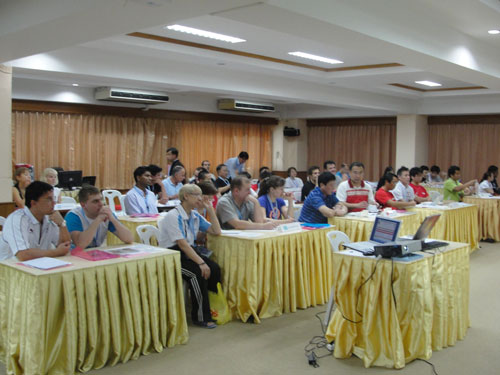 AGU Office Suphanburi (THA) March 9, 2012: With the 19 federations participating in the 12th Artistic and Trampoline Gymnastics Asian Championships on the ground in Suphanburi (THA), organisers called for an orientation meeting this afternoon at the meeting room of the competition hall, as MAG gymnasts start the Podium Training with the 3 subdivisions.
Mr. Sawat SOPA President of Thailand Gymnastics Association addressed a warm welcome to the head of delegations on behalf of the Organizing Committee.
Mr. Chackapoj SRISILPA presented his team on-site and went over organisational details and confirmed that the experienced organising team will do everything in its power to assist delegations in any way they can during these championships.
Mr. Mohamed Saeed AGU Secretary General said he looks forward to an exciting event in the magnificent competition hall here in Suphanburi province.
The three Technical delegates for MAG, WAG and TRA respectively Mr. Zhongyi MIAO, Mrs. Radiye ZAINAL and Mr. Liu  Xing praised the LOC for its preparations and the excellent conditions of the competition venue. They called for fair play and genuine sportsmanship, emphasizing the importance of these championships, which follow the next Juniors Asian Championships in 2014 that will be a qualifying event for the second Youth Olympic Games 2014.
Mr. Anis SAOUD, AGU Technical Manager, present the update detailed schedule of the event and asks the team managers to fill the start order forms and return it after the meeting to prepare the start list of the competition I in time; he request to all coaches to follow the instructions and the rules of the event and help the organizing committee to have a good organization. 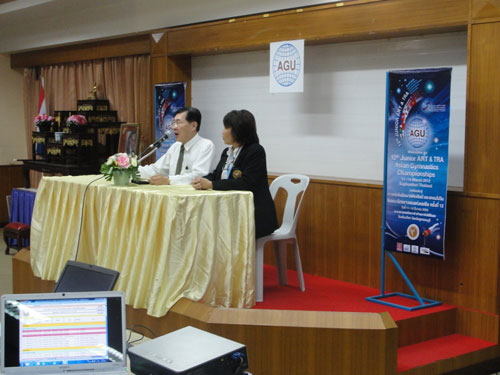