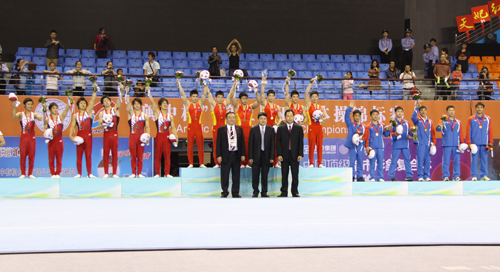 Putian (CHN) AGU Office, November 11, 2012: With superb opening ceremony of the 5th Senior Artistic Gymnastics Asian Championships made from Chinese Gymnastics Association which is a tradition of the Putian City dances; 3 subdivisions of 16 federations was present in the team final, all-around final and individual qualifications but in the end of the third subdivision, China (LIU RONGBING, ZHOU SHIXIONG, LIN CHAOPAN, YANG SHENGCHAO, JI LIANSHEN and CHENG RAN) won the team final of the 5th Senior ART Gymnastics Asian Championships which held in Putian (CHN) during 11-14 November 2012, with a total of 361.500 points ahead of Japan (346.600 pts) – Silver and the DPR Korea, taking the Bronze medal with 346.500 pts after 2 years of suspension.
China was best on all apparatus, The Japan performed exceptionally well were sitting in second position, pressing DPR Korea to fight for the Silver. Korea was also very good on all apparatus with some mistakes in the pommel horse .
It was one of the most exciting Senior Asian Championships Finals seen in Men’s Gymnastics! The Chinese with a new team proved that they are the best team at the moment! They had the highest Start Values, and this made the difference for them; in spite of some small mistakes, they were also very stable. You will remember some of these names in the future competing in the next events. 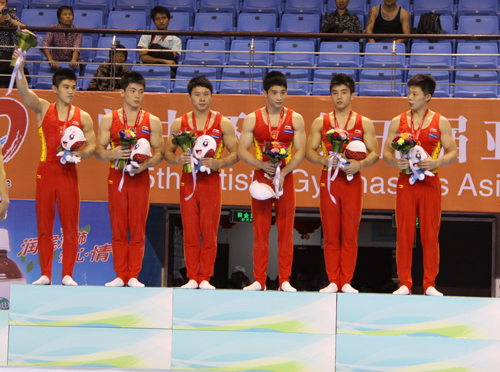 The individual All-Around event was dominated by Chinese LIU RONGBING in the first place with a total of 90.050 pts following by ZHOU SHIXIONG also from China with a total 89.450 pts and Third place to Korean gymnast KO YEDARM with 86.300 pts 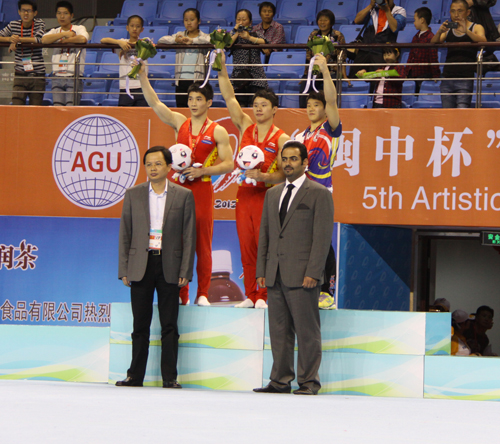