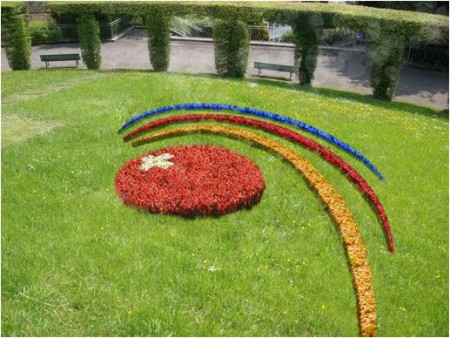 The 14th World Gymnaestrada will start today with a participation of up to 19,100 gymnasts from 55 countries representing all continents, with four African, eleven American, eight Asian and 31 European nations as well as Australia participating.
The Asian countries are Qatar,Japan,China,Korea,Singapore,Uzbekistan,Thailand and Kazakhstan.

The event will be held in Lausanne city, the main venues, Pontaise Olympic Stadium, Beaulieu Lausanne and Malley Sports Centre, a number of sites within the city centre will host performances and concerts, bringing entertainment and animation to the heart of Lausanne!

Over the past weeks, the city has been decorated in the colours of the World Gymnaestrada, displaying flags and posters everywhere and even setting up round-about flower arrangements in the form of the event’s logo.

Tickets for 1 million CHF have already been purchased, with the Opening Ceremony and the Swiss National Evening sold out.

Committed to sustainable development, the City of Lausanne launched a project coined “RESPECT” to proactively address the issues of environment, social structure and economy in a way that aims to improve the quality of life experienced by both its inhabitants and its guests.