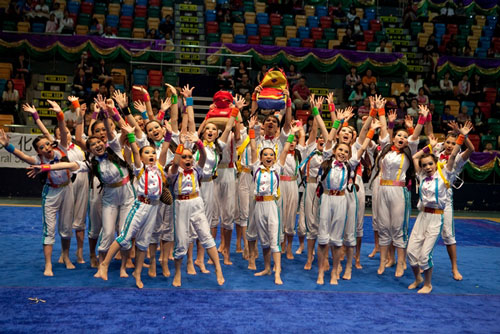 Doha (QAT), AGU Office, May 27, 2010: 8 Asian Federations participated to The 3rd Asian Gymnaestrada which held in Hong Kong during the period 22-23 May 2010 which are China, Japan, Korea, Mongolia, Sri Lanka, Thailand, Uzbekistan and Hong Kong with a total of 330 participants and the Organizing Committee allow the participation of 37 teams from Hong Kong with a total of 800 participants which give a total of 1,130 gymnasts. The performances was held in Queen Elizabeth Stadium in Hong Kong.
The event included a workshop given by FIG representatives Margaret Sikkens Ahlquist (SWE) and Tatsuo Araki (JPN), with practical and theoretical sessions that presented a wealth of information on the World Gymnaestrada, Gym for Life Challenge and the FIG Foundation courses, together with gymnastics and dance lessons. Enthusiasm was high as participants engaged in the two-hour workshop that did not fail to please.
For the Festival, the Organising Committee set aside two full days to accommodate the vast array of team programmes. A group of experts evaluated every programme, concluding with awards for various skills.
We saw some very good, high-quality performances, though the youngest gymnast was a mere 2 1/2 years old and the oldest 70.
After the awards had been handed out, a closing banquet was held on one of the cruise ships in Hong Kong. The Founder and Life President of the Gymnastics Association of Hong Kong, Dr Winnie W.Y. Ho attended both the festival and the closing banquet. She told of her participation in the first World Gymnaestrada back in 1953 in Rotterdam.
The Organising Committee, alongside its President Ms Alice Leung Fung Shan and the Secretary General of the Federation Mr Albert Ng, did everything possible to make this Asian Gymnaestrada a success – and they did succeed! 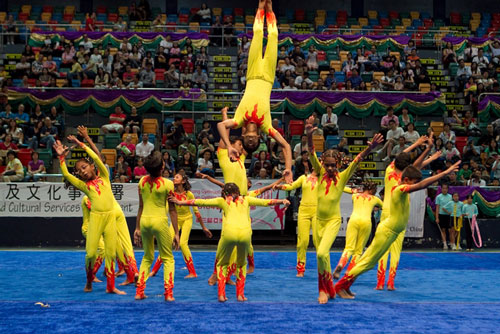