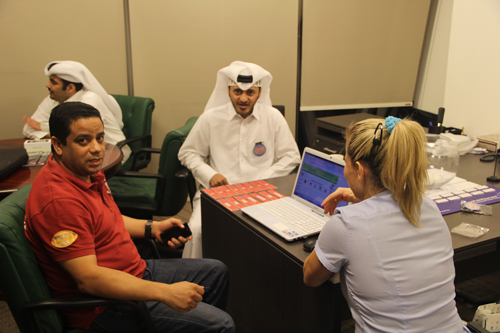 Doha (QAT) AGU Office, February 06, 2014: The drawing of lots of the 13th Junior Rhythmic Gymnastics Asian Championships that will be held in Kuala Lumpur – Malaysia during the period 21 to 24 February 2014  was held on February 06, 2014 less than 2 weeks prior to the beginning of the event.
The draw was conducted at the Headquarter of the Asian Gymnastics Union (AGU) in Doha (QAT) in the presence of AGU President Mr. A-Rahman Al-Shathri, The Secretary General Mr. Mohamed Saeed; the Technical Manager Mr. Anis Saoud and Ahmed Daoud  the executive secretary.
The draw was held after the deadline of the nominative registration. The Organising Committee of the 13th Junior RG Asian Championships registered the participation of 16 National Federations as the following:
SIN – QAT – THA – LEB – PRK – KGZ – JPN – MAS – KOR – KAZ – CHN – HKG – UZB – MNG – SYR & INA