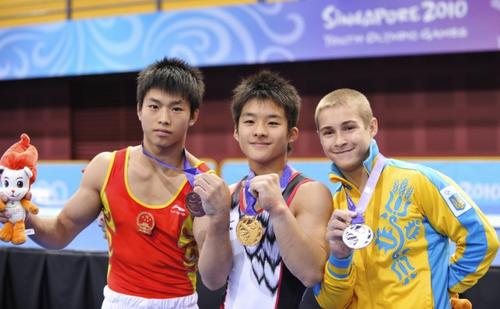 1st Youth Olympic Games: Singapore August 14, 2010: The eighteen All-around finalists of the Men’s Artistic Gymnastics competition warmed up to the excited screams of young fans at Singapore’s Bishan Sports Hall last night. The atmosphere heated up the moment the gymnasts entered the competition hall and IOC President Jacques Rogge, who came to the venue just to watch this Final, appreciated the fantastic gymnastic action shown by the sport’s rising stars.
During the All-around Final, the 16 to 17 years old boys ran through the six apparatus in three groups of six gymnasts, of whom the six top qualifiers were grouped together and followed the Olympic apparatus order: Floor, Pommel Horse, Rings, Vault, Parallel Bars and Horizontal Bar.
The competition promised to be exciting with top players from Japan, Great Britain, Ukraine, China, Russia and Romania all in for the medal ranks. And indeed, it was a close battle between gymnasts who show a mature technical level at a young age!
Contrasting fates for title aspirants Sam Oldham (GBR) and Yuya Kamoto (JPN) last night; while Yuya easily went through his routines without any major mistakes, Sam’s luck went bad when he finished a landing on his backside during his opening Floor routine. Nevertheless, the reigning Junior European Champion showed mental strength, fighting his way back into competition and placing second after the fifth rotation. Of all things, it was on Horizontal Bar, his absolute specialty, where Sam’s hopes for a medal were ultimately dashed. Showing off his trademark routine, he failed to grab hold of the bar and fell from the apparatus and down into fifth place in the final ranking. “My timing was off. I’m devastated,” said Sam. “I was in such shock (when I fell). I can’t believe it happened to be honest.” Sam learnt a hard lesson last night, which is part of the game. Let’s hope he can use it for gain and come back strong in the Apparatus Finals this weekend. He qualified on Floor, Pommel Horse, Parallel Bars and Horizontal Bar.
Yuya has it all to become a great champion! With the All-around Gold concluding his international debut last night, Japan’s rising star made the first move to follow in the footsteps of other world-class gymnasts from his country such as reigning World Champion Kohei Uchimura. Yuya did not only shine with style and precision on every single apparatus, the humble and polite young athlete is an excellent role model in terms of sportsmanship. With an ever-present smile on his face, he is always friendly towards his fellow competitors after his routines and shows great respect for each one of them. Yuya introduced himself to the international gymnastics scene with impressive self confidence stating, “I didn’t feel nervous at all. I was confident because I’ve been training long and hard. These two scores are the highest I’ve ever posted. I got my best results in Singapore.”
Ukrainian Oleg Stepko, who qualified third, was hoping for a coveted medal. After rotation four, he placed a mere fifth, but a fabulous routine on Parallel Bars brought him back into the game. He moved up to second place and confirmed that on the last apparatus, the Horizontal Bar. Oleg wrapped up the event with a Silver.
China’s Zhu Xiaodong seemed a little nervous yesterday, feeling a great amount of pressure on his shoulders here in Singapore. He was out of synch in this competition, dropping to fifth before the last rotation. As the saying goes, “It ain’t over till it’s over”, and Zhu showed nerves of steel on Horizontal Bar, scoring the highest mark on the apparatus last night. Zhu’s sound routine and Sam’s unfortunate fall were what landed a Bronze for Zhu.
Romania’s Andrei Muntean, a standout performer on Rings, did well in the first part of the competition, placing second after four rotations. A failed routine on Parallel Bars however, way down from what he showed in Qualification, and a moderate performance on Horizontal Bar were not good enough for him to remain in the medal ranks. He finished on rank four, somewhat disappointingly, especially since he was outscored with only .05 points by Zhu. Andrei has another chance to shine during Pommel Horse, Rings and Parallel Bars Finals this weekend. 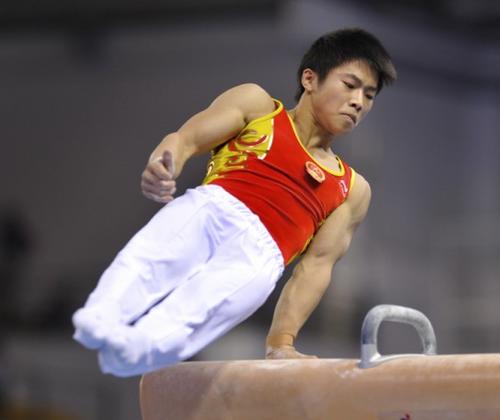