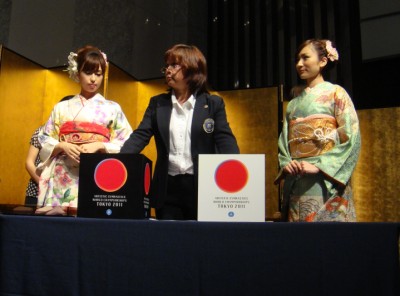 The official drawing of lots for the 43rd FIG Artistic Gymnastics World Championships scheduled for October 7 – 16 in Tokyo (JPN) was held today in Tokyo, at the Prince Park Tower, the official FIG hotel of these championships.

Both Technical Presidents, Adrian Stoica (ROU) for the Men’s Technical Committee and Nellie Kim (BLR) for the Women’s TC attended the procedure.

Check draw results here and consult the official procedure for the drawing of lots for these championships.

A total of 83 countries entered 297 Men’s and 258 Women’s Artistic gymnasts for the event, bringing the total to 555 participants.

The competition will be the first qualifications’ event for the London 2012 Games. The top eight teams in Tokyo, as well as all Gold, Silver and Bronze medallists of the individual apparatus competitions will get their tickets for London. A second qualification session will be held in the North Greenwich Arena of London, the Olympic Venue for Gymnastics, on January 10 – 13, 2012.

In total, the FIG will qualify 98 men and 98 women gymnasts for the Olympic Artistic Gymnastics competitions.