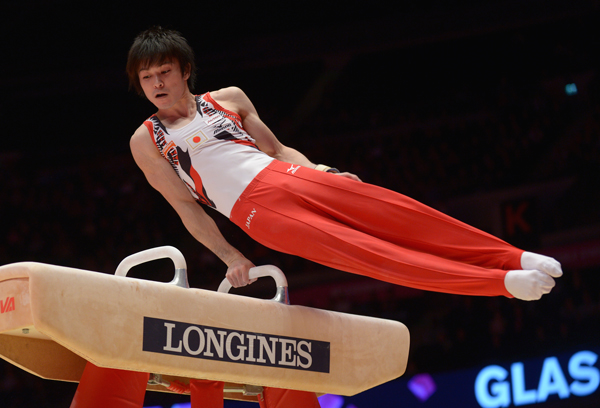 Doha: Six-time all-around world and reigning Olympic champion Kohei Uchimura failed to qualify in the men’s pommel horse and rings at the 11th FIG Artistic Individual Apparatus World Cup here on Wednesday.
An umpressivee 19th finish was what the Japanese legend could achieve on the horse after he fell down during the exercises.
Uchimura accumulated 13.233 on the apparatus list, which was topped by Chinese Taipei’s Lee Chih Kai (15.200) followed by China’s Zou Jingyuan (15.066) and Ireland’s Rhys McClenaghan (14.700).
Eight top qualifiers would contest in the finals on Friday and Saturday.
On the rings, Uchimura, who is the only gymnast to win six World titles in a row before missing it last year in Montreal, Canada, due to injury, was a shade better.
The 28-year-old finished 10th with 14.366 points.
“My landing was good, but somehow I couldn’t perform to my ability. The injury scare played on my mind and I was a bit cautious,” Uchimura told www.dohagym.com.
Uchimura will be seen in action on the morrow when he competes on the horizontal bar.
Ukraine’s Igor Radivilov (15.066), China’s Zou Jingyuan (14.866), Romania’s Andrei Muntean (14.766), Turkey’s Ibrahim Colak (14.766), Italy’s Marco Lodadio (14.633), Belgium’s Dennis Goossens (14.533), Japan’s Yuya Kamoto (14.466) and USA’s Marvin Kimble (14.466) qualified for the finals.
In the floor exercise, Takumi Sato (Japan), Dmitri Lankin (Russia), Chih Kai Lee (Chinese Taipei) and five others made it to the finals.
In the women’s qualification rounds, Uzbekistan’s 42-year-old Oksana Chusovitina showed her exemplary prowess on the vault by topping the chart (14.283) ahead of seven other qualifiers.
Chusovitina, who is targeting her eighth Olympics in 2020 Tokyo Games, is one of the living legends in women’s gymnastics, and she will be a firm favourite to retain the title she won here last year.
Nina Derwael, bronze medallist at the Montreal Worlds, lived up to her reputation by topping the uneven bar list with 15.233 points.