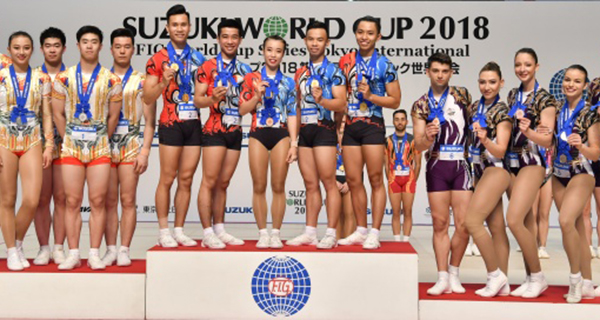 Almost a year ago, they had won silver and bronze in Tokyo but they topped the podium in spectacular fashion to take their country’s first World Cup golds for five years.

The Group of Le Hoang Phong, Nguyen Che Thanh, Nguyen Viet Anh, Vuong Hoai An, Tran Ngoc Thuy Vi was placed fifth in the qualifiers, but came back strongly to annex the gold with China in second and Bulgaria third.

Nguyen Viet Anh, Vuong Hoai An and Tran Ngoc Thuy Vi collected their second gold after winning as a Trio with a score of 22.077.

Meanwhile, Mizuki Saito gave his home fans something to cheer for when he won the individual men’s event.

He edged out rival Daniel Bali, who was a joint-winner with Saito in the season-opener in Cantanhede last month, but this time the Japanese prevailed due to a superior execution score of 8.900 against the Hungarian’s 8.850. Brazil’s Lucas Barbosa came third.