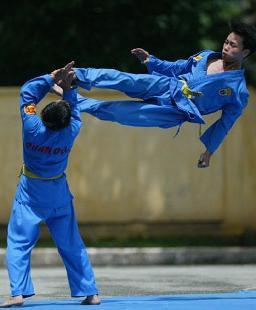 AGU office; Doha (QAT) March 6; 2011: The official competition programme of the 26th SEA Games will present the Vietnamese sports team with many challenges as a series of sporting events which are considered as Vietnam’s advantages will be excluded. The target of being ranked amongst the top three in the medal tally seems to be the toughest ever.
The ‘lost’ gold medals
The only advantage to Vietnam is the appearance of Vovinam with 14 sets of medals, of which Vietnam may be expected to win at least half. Besides this, other events such as chess and diving are also coming back to the Games.
However, these advantages are unlikely to compensate for the series of ‘key’ Vietnamese sporting events which have been excluded or reduced in scope. For instance, shooting in which Vietnam has always excelled in the team events has been reduced from 36 sets of medals to nine; and six events in pencak silat have been eliminated, five of which are considered to be Vietnamese strengths. Shuttlecock has been completely excluded.
At the 25th SEA Games, shooting contributed 11 gold medals to the Vietnamese team’s tally, but now only three golds can be expected. Similarly pencak silat brought six gold medals at the previous SEA Games but this time the Vietnamese martial artists can only pin their hopes on winning four. The same situation occurs in wrestling, billiards, petanque and especially women’s football, in which Vietnam is defending champion. Compared to two years ago, Vietnam is likely to ‘lose’ about 25 to 28 gold medals; a significant figure.
Vietnam’s competitiveness for gold medals is also lower compared to previous Games as many events such as water-polo, boxing, basketball, equestrian, softball, water skiing, wall climbing, roller skating, etc are not its strength.
Modest target
It seems that this will be the most difficult SEA Games for Vietnam since 2003 when it hosted the Games. It is very likely that the host nation, Indonesia, will occupy the first position in the medal tally while the race for second and third places will see a competition between Thailand, Vietnam and Malaysia.
Aware of the hardships ahead at this SEA Games, the sports sector is getting down to preparation work and all the national teams will be convened in March. As planned, a total of nearly 1,000 athletes will be called up to prepare for the Games. Vietnam will compete in approximately 400 contests in 28 to 31 sporting events; accounting for only about two thirds of the SEA Games competition programme. To target the third position, Vietnam must win at least 70 to 75 gold medals; a feasible goal but not at all simple and it will require great efforts from the whole team.