Doha (QAT), AGU Office, October 14, 2011: The world’s best female gymnasts captivated fans tonight at the Tokyo Metropolitan Gymnasium during the Women’s Individual All-around Final of the 43rd Artistic Gymnastics World Championships. The competition was exactly what many fans had hoped it would be, producing a dramatic showdown between top qualifier Victoria Komova of Russia and the United States’ Jordyn Wieber.
USA’s Jordyn Wieber (59.382) claimed the 2011 Women’s All-around world title, prevailing over Victoria Komova of Russia (59.349) and China’s Yao Jinnan (58.598).
Of the 244 female gymnasts who competed in the preliminaries, the best 24 lined up for this Final. Representing 16 countries, the finalists started in groups of six with their qualifying results set back to zero. The top six qualifiers started on Vault and followed the Olympic order throughout the competition.
Komova, who led in qualifying, had fallen off the Beam and made a costly mistake on Floor during Tuesday’s Team Final, whereas her rival Wieber had sailed through all eight routines so far in Tokyo. Could that be an indicator for tonight’s performances? Sport would not be sport if it was that predictable, and especially in gymnastics anything can happen.
This said, Wieber had an early lead over the field with higher difficulty on Vault, leaving Komova in fifth position by a margin of nearly .8 points. On Uneven Bars, by contrast, Wieber was off the rhythm, while Komova got beautifully through her routine. The young Russian marked the highest score on this apparatus (15.400), which put her into the lead at the midway point. Wieber then fell back into fourth position behind China’s Yao Jinnan and Huang Qiushuang, who both excelled with their Bar and Vault routines. At that point in time, Romanian Ana Porgras was also still in the race for a medal. She scored the overall second-highest mark on Beam (15.100) and with a solid performance on Floor, was in fifth position after two rotations.
With the Beam and Floor still to come for the group of top qualifiers, and the overall scores of the top five ranging from 29.066 to 30.333, anything was still possible.
The third rotation brought falls off the Beam from Huang, Kseniia Afanaseva (RUS) and Yao. Komova hit her routine, but stayed below her qualifying score. Performing last on this apparatus, Wieber showed true nerves and a strong will to fight back. She nailed her set, to earn the highest Beam score of the night (15.266). Komova was still leading overall, but Wieber had come close and sat in second position with a .5 deficit. Yao was now third, followed by Huang and Porgras.
In an exciting denouement, the destiny of the All-around Gold and Silver medals now came down to the two last displays of the Final. Floor was the “weakest” event for both Komova and Wieber during the preliminaries, with their scores being only .1 apart. But it was a margin even smaller than this that would separate the pair’s final scores. Second to last up, Wieber produced a solid routine, but she stepped out of bounds and was deducted .1. Komova, meanwhile, had less difficulty but not the cleanest execution.
So in the end, the Gold was Wieber’s. She won with a total of 59.382 to just edge out the disappointed Komova (59.349).
Yao remained third while Alexandra Raisman (USA) moved up to fourth place after her huge Floor performance (14.900).
The host country’s Koko Tsurumi (54.999) and Rie Tanaka (54.699) finished 15th and 20th respectively. 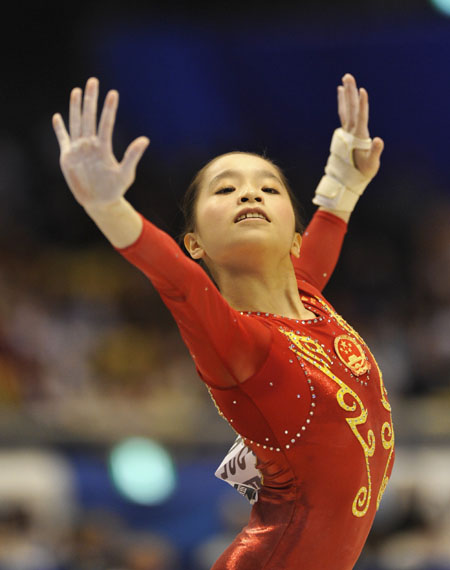