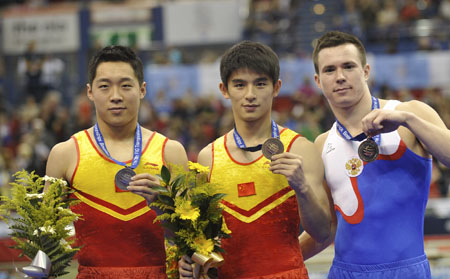 Doha (QAT), AGU Office, November 24, 2011: The women’s individual Tumbling final was like round two in the head to head contest between Anna Korobeynikova (RUS) and Jia Fangfang (CHN). Fangfang took the first round by a narrow margin as she helped China to win the World team title but the individual gold was what they both really wanted.
First competitor in the final Jessica Courreges-Clercq (FRA) set the standard for those to follow and the level of tumbling increased with every run until the first Korobeynikova pass. She delivered a D score of 8.300 which thrilled the crowd and matched this with first class execution. The audience fell silent as Fangfang composed herself at the top of the track. The speed, lightness and power of her first run was truly amazing but her D score was short of the Russian’s; 7.800. The execution score appeared and topped that of her rival. Total score for the first run, Korobeynikova 35.400, Fangfang 35.600!
Although this battle for the gold was totally absorbing, there was plenty of action as the others competed for the bronze. An excellent high speed tumble by Rachael Letsche (GBR) looked to put her into contention but unfortunately she had to touch the mat with both hands to control the finish. This virtually eliminated her from the reckoning.
In the final run Korobeynikova increased her routine score to 35.500. She wasn’t going to relinquish her title without pulling out all the stops. Fangfang produced a stunning final run, matching the Russian’s difficulty but her execution was immaculate, resulting in a score of 36.100. She was the new World Champion by a margin of 0.800!
Anzhelika Soldakina (RUS) and Chen Lingxi (CHN) had their own personal battle and this time the Russian tumbler came out on top by a margin of 1.300.

In the Men’s final, Yang Song finally became World Champion having run the risk of becoming a serial silver medalist. The audience didn’t even have to wait for the judges’ score to tell them that this Chinese gymnast was the world’s best; such was the clarity of his superiority. Song was generous in his praise for young Kristof Willerton (GBR) in his first World Championships.
“I was impressed with him. He is an exciting new talent and I know he will be a tough opponent for me in the future. He can be a world tumbling star!”
Kristof was indeed impressive and showed an ability to deliver his best under pressure. He was surprised and delighted to finish in a well deserved fourth place.
The ability of the tumblers to maintain momentum following mid-track landings from twisting double straight somersaults was truly amazing. Triple back somersaults were commonplace and Mikael Nissen (DEN) pulled out a superb piked triple in his first run.
Once again the medal contest was between China and Russia with the Chinese again the victors. Zhang Luo (CHN) took the silver with a clear distance between himself and Andrey Krylov (RUS) in bronze medal position.