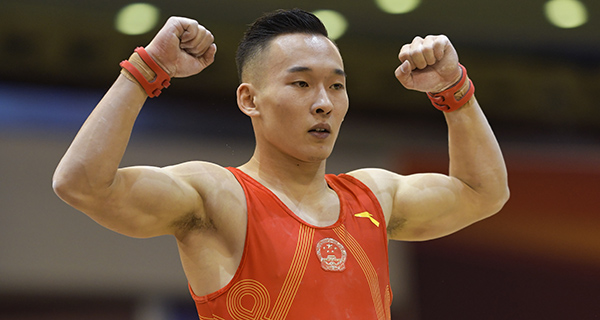 DOHA: It was an impressive day for Asian gymnasts as China’s defending world All-around champion Xiao Ruoteng led the show by topping the men’s qualification for the 48th FIG Artistic Gymnastics World Championships here at the Aspire Dome on Friday.
China earned five berths to apparatus finals along with the United States, but Japan earned only four.
First-day leader Japan’s Nikita Nagornyy (87.098) dropped to second followed by two-time US Olympian Sam Mikulak.
China’s Sun Wei and Japan’s defending All-around bronze medallist Kenzo Shirai came fifth and sixth respectively.
The Chinese team, however, failed to overtake a strong Russian squad.
China began confidently in the 10th and final rotation but settled for second, posting 257.836 to Russia’s 258.402. Japan came third.
“We’re a young team and don’t expect to win the gold. Maybe, the best result is the top three. There are so many strong teams, and the one who performs best in the final can have the gold. We believe in ourselves,” said Xiao, who qualified first to the All-around final with 87.332 points.
The top eight teams and individuals in the All-around and apparatus rankings in the qualification competition advance to the finals at the Worlds where a maximum of two gymnasts per country may advance to any one individual final.
The three medal-winning nations in the team final clinch team berths to the 2020 Tokyo Olympic Games while the top 24 teams advance full teams to the 2019 World Championships in Stuttgart, Germany.
Ri Se Gwang of the DPR Korea continued his supremacy on vault while Kohei Uchimura, 2015 world champion on horizontal bar, qualified over 2012 Olympic champion Epke Zonderland (NED).
Kenzo Shirai, the reigning world champion on floor and vault also qualified to the finals in his best events.