Yeo pips Oksana in battle between youth and old 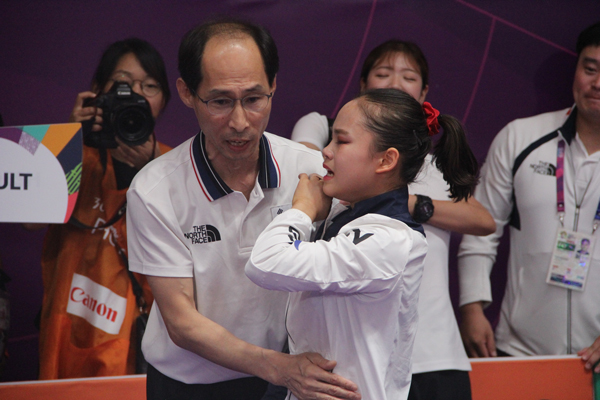 JAKARTA, Indonesia: South Korea’s young gymnast Yeo Seo Jeong will forever remember this day as she beat Uzbekistan’s legendary Oksana Chusovitina in the women’s vault final here on Thursday.
It was the best finals of the evening which drew a thunderous applause from the fans, who waved and screamed when Chusovitina stepped on the floor.
She had a perfect landing in both her attempts which ensured her a top finish with 14.287, but everything changed following Yeo’s exercise.
The Korean youngster, who is two year younger to Chusovitina’s son, was outstanding with her execution and difficulties. And, as soon as the score 14.387 was flashed on the giant screen, the tiny little Yeo broke down.
After the victory, Yeo wept and was consoled by her 43-year-old challenger, who won a silver, along with other members of the team.
“I want to go to the Tokyo Olympics and win a gold for my dad,” she said after securing the top spot with 14.387.
Yeo Hong Chul had won a silver on vault at the 1996 Olympic Games in Atlanta, but never secured an Olympic gold.
Chusovitina, oldest female gymnast in the competition, said that “silver was like getting gold”.
The 43-year-old, who has already said she expects to compete in Tokyo in her eighth Olympics at 45, missed the gold medal by one-tenth of a point.
Chusovitina took the silver followed by North Korea’s Pyon Rye Yong (13.875).

Yeo pips Oksana in battle between youth and old