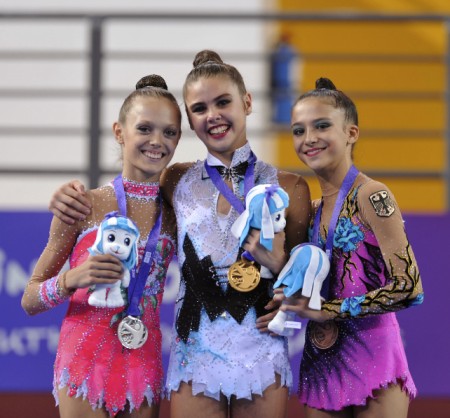 1st Youth Olympic Games – Singapore (SIN) August 25, 2010: Eight Rhythmic gymnasts in the Individual category and four Groups made the cut for the Youth Olympic All-around Finals during yesterday’s qualifying round. The girls returned to Bishan Sports Hall this afternoon to perform once again their beautiful routines in these popular events.

Individuals
With Russia’s Alexandra Merkulova and Alina Charopa of Belarus far ahead of the field in the Qualification, they had everything they needed to take away Gold and Silver today providing they were able to maintain their level without any major mistakes. They would still have to give it all they had if they wanted a medal, since qualifying scores are not transferred to the Finals and the competition starts at zero.
A close battle for Bronze was expected between Germany’s Jana Berezko-Marggrandner and Anastasiya Kisse of Bulgaria, who tied in rank three and four during preliminaries. Wan Nin Lee of Malaysia, a crowd’s favourite, could also aspire to a medal today. She was not far behind the top four in Qualifications, having ranked fifth.
The eight girls competed in four rotations on Rope, Hoop, Ball and Clubs.

Rope
The first heat on Rope brought no huge surprises with gymnasts performing their routines smoothly. Alexandra received a .05 penalty for overtime and Arina had a slight uncertainty, when she once dropped her rope, but this did not keep them from taking positions one and two.

Hoop
To the enthusiastic support of the crowd, Wan Nin gave an impressive routine on Hoop, securing her personal top score to that point and placing her in overall rank two.
Arina made a major mistake in this rotation when she lost control of her hoop and watched it roll out of bounds. She received a .4 penalty and dropped down to third rank, tying with Wan Nin.
Jana also had problems controlling her hoop towards the end of her routine, which resulted in a lower Execution score and provisory rank four after this second rotation. “My coach told me that I needed to keep fighting till the very end,” and I said to myself, “Get yourself together!”
Alexandra enjoyed huge support from her compatriots on the grandstands today; she acknowledged it with pride after her strong routines. Hoop being her strongest apparatus, she notched her top score of the day (26.250) and confirmed her lead.

Ball
Rotation three was exciting to watch!
Wan Nin started off strongly, displaying a beautiful routine on Ball, very gracefully executed. She received a 25.050, her best today, and confirmed her medal position currently in third.
Arina proved why she was referred to as a strong medal contender in this event. She recovered from her mistake on Hoop and showed a wonderfully smooth routine on Ball that scored even higher than in Qualifications. She moved back into second position.
Jana demonstrated an excellent example of the perfect body – ball relationship. With incredible control of the apparatus, the young German gymnast moved beautifully over the floor in impeccable synch with the music. Her routine was awarded 25.225 points, her top score, but she remained in fourth position.
A bit of a startle for Anastasiya when she failed to control her ball in the final pose and it rolled out of bounds. In tears, she realised that her mistake had put her out of the medal ranks. She saw herself rank five before the final rotation.
Alexandra received another .5 penalty, but she stayed on top of the table.

Clubs
The final rotation on Clubs would decide it all!
Once again, Wan Nin impressed spectators as she ran smoothly through her routine and made only a minor mistake towards the end, when she lost one club. Whether or not her 24.300 was good enough to keep her in a medal winning position depended now on the other competitors.
Arina upped her qualifying score on Clubs remarkably to a 25.775, which added up to a total of 100.400 points; Silver for the Belarusian! “I liked my overall performance but the problem was the hoop. Dropping it was a huge mistake,” she said.
Jana was also able to better her score. She got 25.100 on Clubs, resulting in 98.875 points overall, that finally won her the Bronze and pushed Wan Nin into fourth place. “In my opinion I did quite well, better than yesterday, but that silly mistake spoiled it,” Wan Nin said tearfully. “At least I learned from my mistake and I’ll never do that again.”
Anastasiya finished her competition with style, bettering her previous score on Clubs by .450 points. Unfortunately, she never could recover from that dreadful mistake on Ball and finished fifth.
Alexandra confirmed her supremacy in this event tonight, showing great consistency and routines of a high level of Difficulty and Artistry. Her performance on Clubs scored 25.500 and a total of 103.500 points.
She ran off with Gold and a huge smile on her face!
“I have been dreaming of this for so long. I was so happy that I nearly started bawling,” said the Youth Olympic Games Champion.

With Singapore’s own Group and Australia out of the race, the remaining Groups in the run for a medal in this All-around Final were Russia, Japan, Egypt and Canada.
Russia (52.250) outperformed the rest of the field during yesterday’s Qualification leading with a large margin over Japan (45.900), who qualified second. Egypt (41.650) entered this Final in rank three followed by Canada (41.150) in last qualifying position.
The four-girl Groups performed two exercises, the first on four hoops and the second on four ribbons.

4 Hoops
Favourite Russia was first up. With incredible synchronicity and precision, as well as wonderful timing with the music, the girls with the golden hoops set their mark (26.275).
Team Japan was unlucky tonight. The girls lost control of their hoops on several occasions, with one hoop even falling out of bounds. A penalty of .4 points and a low Execution score resulted in a disappointing 21.100 and last position after this rotation, which would be tough to recover from.
Could Canada make a move here? They impressed with clean Execution, upping their Qualifying score and overtaking Japan in this first rotation (21.775).
Egypt showed dramatically reinforced choreography on Hoops; that along with good Artistry and Execution placed them second (23.000).

4 Ribbons
Russia’s four stayed focused until the end, pleasing the crowd with another flawless performance on Ribbons, even upping their score from the preliminaries. Their total of 52.350 points secured them Gold winning rank one!
“When we were standing on top of the podium, we felt very happy and proud, we do deserve this,” said Russian group member, Olga Ilina.
Japan, still in shock over their failed first routine, were unable to redeem themselves, even though they fought hard for a medal. In the end they were left empty handed on fourth place (42.475).
The question now was who would take the Silver and Bronze. Canada was able to boost their qualifying score on Ribbons, but so was Egypt, who took to the floor last. Egypt (45.275) was victorious in the end with the first Olympic medal for Africa in Rhythmic Gymnastics, a Silver!
Canada’s four, who qualified in fourth position, took home the Bronze (43.425).
“It made us all very proud for our country,” said Melodie Omidi, a member of the Canadian Group. “We’ve worked hard, and it feels good to see it pay off.”
“This medal means joy and pride and a lot of hard work and sweat,” added her teammate Victoria Reznik. 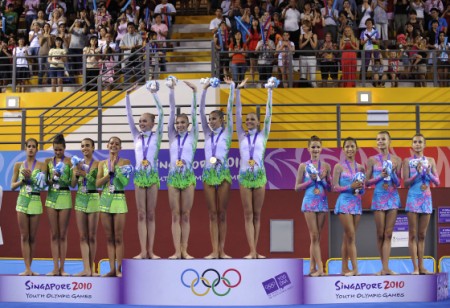