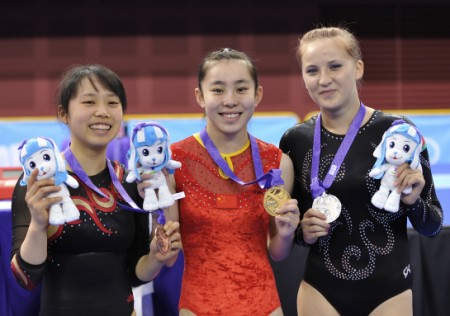 1st Youth Olympic Games, SINGAPORE (SIN) August 21, 2010: The twenty-four Youth Olympic trampolinists put on a thrilling show at Bishan Sports Hall. Local spectators, who had not seen anything like this before what with Trampoline Gymnastics still in the throes of development, were amazed by the high jumps and fascinating skills these youngsters were able to perform on the trampoline. And they did not hold back their excitement, but went all out to provide an enjoyable, supportive and motivating atmosphere for the athletes.

Girls
The day started with the girls’ Qualification, immediately followed by their Final. From twelve contenders, the field was cut down to eight in the Final and everyone was eager to secure their spot. During the first qualifying pass gymnasts are required to show compulsory elements, but the second pass is an open platform for shows of more complex and difficult elements. With difficulty comes increased risk, which on an unfortunate day can mean that gymnasts are not able to complete their routines for unfortunate landings on the edge of the trampoline; it happens.
And that’s exactly what did happen to Germany’s Leonie Adam, who looked promising in the first round and really fancied that spot in the Final. She had to accept a dispiriting twelfth place in the end.
Dutch Denise Liefting started off well enough, but in her second routine she looked a bit shaky, coming close to the trampoline’s edge on several occasions. She finished 10th.
The field was headed by China’s Dong Yi, US American Savannah Vinsant, Belarusian Sviatlana Makshitarova, Japan’s Chisato Doihata and Mariah Madigan of Canada, who were all to be counted in for the medal run, while Dong set the mark in Qualification with an overall score of 68.400. She impressed with spectacular heights and clean execution of complex skills, looking very comfortable straight through her exercises.
Cavannah and Sviatlana performed with equal confidence and tied after Qualification with 64.600 points behind Dong.
In the Final Dong gave another remarkable demonstration of her excellent technique, topping the ranking with a score of 39.900 and claiming the Gold.
‘It is a great honour to win, but this was just a moment of glory. It’s only the beginning. Now it’s time to get back to training,’ the young trampoliner, who describes herself as a restless person, said after the competition.
Sviatlana confirmed her strong performance from the Qualifications and another great routine won her the Silver with 37.700 points.
Savannah experienced one of those unfortunate days, landing on the edge of the mat at the end of an otherwise very good final routine, and dropping back to fifth place in the end (33.500).
Fate smiled on Chisato. The young Japanese gymnast was in sixth during Qualification, but a very impressive and well-executed final routine put her into third rank; she took off the Bronze with 36.700 points. ‘I was very happy to take part, but taking part is not enough if you don’t also have the desire to take it to the next level with a medal,’ she said. Hailing from Osaka, the 16 year old trains in her school gym where she tries to be as successful as her hero, 2000 Russian Gold medal winner Irina Karavaeva (RUS).
Canada’s Mariah Madigan came fourth, scoring a 35.600.

Boys
The boys’ Trampoline field was headed by China’s He Yuxiang, Ukrainian Oleksandr Satin and Ginga Munetomo of Japan during Qualification. Representing China as a country with a strong tradition in acrobatics and a strong programme for Trampoline Gymnastics, He’s excellent technique and the incredible height of his jumps wowed the crowd.
Hailing from the Ukraine, home of 2004 Olympic Champion Yuriy Nikitin, Oleksandr attends a great Trampoline school. The routines he performed here in Singapore were spectacular, and every skill displayed very complex elements.
Ginga loves to feel weightless. The 16 year old Tokyo athlete jumps for the Oizumi Sparrow Taiiku Club and he wants to promote the sport of Trampoline to the masses. There’s no better promotion than the routines he displayed at Bishan Sports Hall last night. Ginga shone with very clean and complex performances that put him into third during the preliminaries. He’s a strong contender for a medal.
Junior European Champion Apostolos Koutavas of Greece flaunted fabulous skill, but bungled the end of his second routine when he hit the corner of the mat; seventh place in Qualification.
Oliver Amann of Germany delighted his coach with well-controlled routines last night and awe-inspiring elements. He looked very confident and qualified in fourth place. The Final also went really well for Oliver; he hit a solid routine that placed him fifth in the end (65.800).
Apostolos redeemed himself after his mistake in the Qualification; he soared into fourth with 39.200 points.
The battle for medals was left to He, Oleksandr and Ginga. Without a single major mistake, the three wonderful trampolinists bedazzled the crowd once more with spectacular performances.
In the end, it was Oleksandr who topped the ranking with a score of 41.000. He mastered the high difficulty of his routine with excellence, setting the bar for He, who competed last. With identical Execution scores (26.000), a bit less Difficulty relegated him to a Silver winning second place (40.700). Ginga kept up with Difficulty, but his Execution was evaluated a little lower. He finished third with a total of 40.000 points.