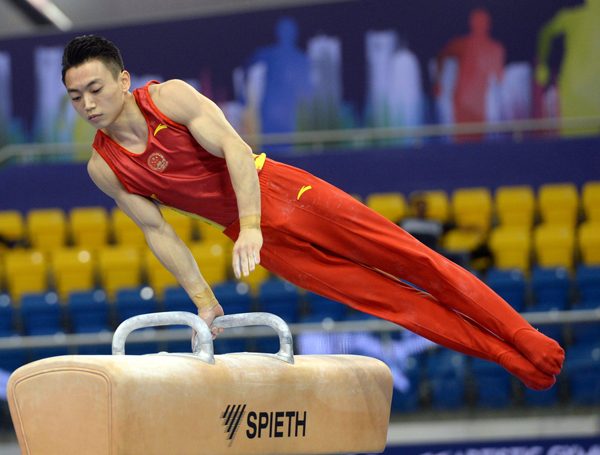 Doha (Qatar), AGU Office: China led Asia’s domination at the 11th FIG Artistic Individual Apparatus World Cup, with Zou Jingyuan bagged two gold and one bronze medal to emerge as the most successful male gymnast in the competition.
Over 160 gymnasts from as many as 39 countries took part in the four-day annual event which was a dress rehearsal for the 48th FIG World Championships to be held here in October.
The men’s competition was held in six apparatus while the women competed in four.
But Zou’s significant moment came when he pipped compatriot and All-Around world champion and Xiao Routeng in the men’s parallel bar.
“It was a great feeling to beat a world champion and win here,” the 20-year-old told www.agu-gymnastics.com.
Zou, who had won the parallel bar title at the 2017 Worlds in Montreal, Canada, last year, garnered an impressive 16.200 points while his other gold came in pommel horse and bronze in rings.
Meanwhile, Xiao’s performance left a lot to be desired.
He would definitely want to forget this competition in a hurry as he not only failed to live up to expectations, but also couldn’t really exert himself.
Xiao, who succeeded Kohei Uchimura as the All-Around world champion last year, lacked confidence which was evident after he fell from the horizontal bar to end up sixth in the overall standings.
It is too early to write him off for the Worlds here, but given the burden of expectations, he will have to put in a lot of hard work to defend his All-Around crown when Doha hosts the mega event after seven months.
China’s Qu Ruiyang showed promise and almost challenged Ukrainian Igor Radivilov (14.599) in vault, but had to be content with silver (14.566).
Another Chinese, Deng Shudi (14.500) bagged a bronze in the men’s horizontal bar, which was won by Croatian Tin Srbic (14.800).
In stark contrast, the Japanese had an unimpressive campaign, where their gymnasts could manage just one medal.
A third-place finish by Ryohei Kato in men’s floor final wasn’t the kind of performance the Japanese had expected particularly after the early ouster of reigning All-Around Olympic champion Kohei Uchimura.
Kato is one of the best names having won a team gold and silver at the 2016 Rio and 2012 London Games respectively.
A former world champion in parallel bar, the 24-year-old finished sixth in the same apparatus in Doha.
He fared badly in pommel horse (eighth) and horizontal (seventh) which should be a wakeup call before the Worlds.